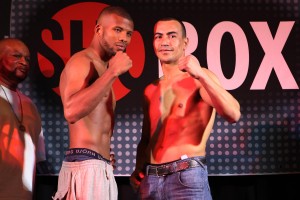 LAS VEGAS (May 10, 2012) – All four fighters participating in an eagerly awaited doubleheader on ShoBox: The New Generation tomorrow/Friday, May 11, live on SHOWTIME® (11 p.m. ET/PT, delayed on the West Coast) made weight on their first attempts Thursday at Texas Station Gambling Hall & Hotel in Las Vegas. 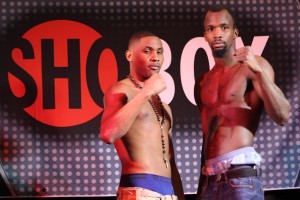 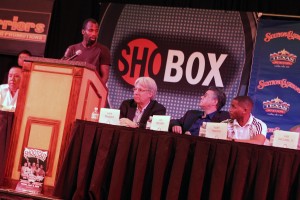 What the fighters said Thursday:

“Thank you to the United States for the freedom to fight professionally. Thanks to SHOWTIME for making me able to show my talents. I’m in great condition. I’m in the best shape I’ve ever been in and I had the best training camp of my career.

“This is a great opportunity and I won’t let it pass me by. I’m dedicating this fight to all the mothers in the world, especially my mother in Cuba.’’

“I want to thank everybody for coming to this fight. The only thing I can say is Yudel is a great fighter, but I’m better. Tomorrow night I will be the better man.

“I’m not taking anything away from him, but I will win. Watch tomorrow night.’’

“Thanks to my promoters and SHOWTIME for this opportunity. I can’t wait for the fight. I wish it was today. I will win by a knockout. He’s in with a real fighter now. You could tell he was nervous.

“I’m going to beat him up tomorrow night.’’

“This is only the beginning. I will definitely be victorious tomorrow night. He talked too much before the fight. He never beat anyone, so why is he talking like a world champ?

Tickets for “Shootout at Texas Station” are priced at $27 and $52 and on sale at Ticketmaster, any Texas Station rewards center or at SCLV.COM/CONCERTS. A few VIP seats are available at a price of $102 can be purchased by calling (954) 985-1155. The event is promoted by Warriors Boxing.

Mike Crispino, known for his work on the MSG Network in New York, will call the blow-by-blow action on ShoBox with Steve Farhood serving as expert analyst. Gordon Hall is the executive producer of ShoBox with Richard Gaughan producing and Rick Phillips directing.