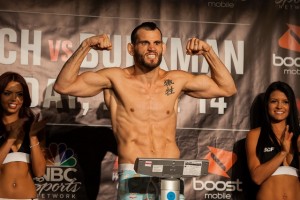 Fitch (pictured), a member of San Jose, Calif.-based Team AKA, submitted Burkman with a rear-naked choke in the second round of their first meeting nearly seven years ago.

Rising stars Steve Carl (left) and Tyson “Man of” Steele (right) will face off in the co-main event.  Carl has notched five consecutive victories while Steele will enter the cage on a four-fight win streak. 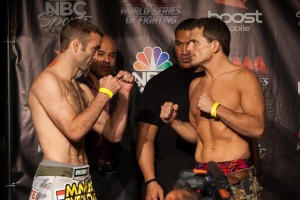 All 14 other fighters on the nine-bout card, with the exception of featherweight (145 pounds) preliminary card bout competitor Jeff Smith (10-1) of Harrisburg, Pa., made weight the first time around.  Smith weighed in at 146.4 pounds, just .4 pounds over the limit, for his meeting with Jerrod Sanders (11-1) of Oklahoma City, Okla.

Undefeated prospect Justin Gaethje (8-0) of Denver, Colo. will collide with Brian “The Bandit” Cobb (20-7) of Bakersfield, Calif., in a lightweight contest and the first televised main card bout of the night.

In preliminary card action, battle-tested submission specialist John Gunderson (34-14) of Houston, Tex. will be pitted against Dan “The Upgrade” Lauzon (16-4) of Bridgewater, Mass. in another lightweight tilt.  All 16 of Lauzon’s professional career victories have come by way of (T)KO or submission.

Undefeated prospects Krasimir Mladenov (9-0) of Borica, Bulgaria and Kendrick Miree (5-0) of Atlanta, Ga., will square off at middleweight (185 pounds).

Tickets for the star-studded, nine-bout World Series of Fighting event, priced from $29 (plus applicable service fees), are on sale at the Hard Rock Hotel Box Office, all Ticketmaster locations, online at Ticketmaster.com and charge-by-phone at 800.745.3000.

Doors at The Joint at Hard Rock Hotel & Casino will open at 4:30 p.m. PT and the first preliminary card bout will begin at 5:30 p.m.

ABOUT WORLD SERIES OF FIGHTING
Based in Las Vegas, Nev., the fight capital of the world, World Series of Fighting is a professional Mixed Martial Arts (MMA) fight promotion dedicated to delivering an incredible, action-packed entertainment experience for fight fans by producing the best possible matchups between elite fighters from around the globe. For more information please visit www.WSOF.com. Follow World Series of Fighting on Twitter @MMAWorldSeries and World Series of Fighting President Ray Sefo @SugarRaySefo.