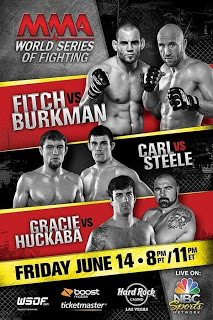 With their third event just a few days away, the World Series of Fighting is still searching for an identity and place in the world of mixed martial arts. This Friday night could put them alongside other top promotions in MMA.

WSOF has been in the news lately for all the right reasons. From announcing high-level fights to signing mma superstars, WSOF is proving to be a major player in the sport. They’ll rely on one of the highest profile signings to make WSOF 3 a memorable night.

Headlining the promotion’s third fight card will be former UFC Welterweight Jon Fitch (24-5-1). He’ll be taking on another UFC castoff in Josh Burkman (25-9-0). Although not technically a title fight, many believe the winner of this bout could fight for or be named the inaugural welterweight champion.

Fitch, who trains out of the famed American Kickboxing Academy in San Jose, Calif., is making his promotional debut after being cut by the UFC back in February. The former welterweight contender has been making his rounds and, to the disappointment of some, he’s had to spend a lot of time discussing his past in the UFC. This will open a new chapter for Fitch. One he hopes includes titles and more respect.

First, he’ll have to get through a familiar opponent in Burkman. The two first met in 2006 at UFC Ultimate Fight Night 4. Fitch defeated Burkman via a 2nd round rear naked choke. Burkman definitely has revenge on the mind. After his TKO victory over Aaron Simpson at WSOF 2, he asked to face Fitch and welcome him into the promotion.

Fitch and Burkman are not the only former UFC fighters on Friday night’s card. Also on the card is former UFC Lightweight Jacob Volkmann (15-4) who will take on Lyle Beerbohm (21-2) in one of the night’s most anticipated bouts. Volkmann lost two of his last three bouts before being cut by the UFC. On the other hand, Beerbohm has won his past six bouts, five of which came via finishes. Both fighters are making their WSOF debuts and, like all weight classes in the promotion, can solidify their spot at the top of the roster.

With several former UFC fighters on the card, it allows fans to zone in on those fights but it is the night’s co-main event that will likely steal the show. A welterweight battle between Tyson Steele (10-1) and Steve Carl (19-3) looks like a bout that can end in a finish. Combined these fighters have 21 submission victories and are both on impressive winning streaks.

Steele and Carl were victorious in their WSOF 1 bouts. Steele defeated Gregor Gracie via first-round TKO while Carl defeated Ramico Blackmon via first-round submission. Both fighters are on the verge of being superstars and could play a big role in making WSOF a premier destination for fighters.

In the main card’s opening bout, which will be on NBC Sports Network, Justin Gaethje returns to the WSOF after defeating Gesias Cavalcante at WSOF 2. He will face off against Brian Cobb who defeated Ronys Torres at WSOF 1. This lightweight fight will showcase the younger Gaethje taking on the veteran Cobb who has fought for the MFC and the UFC. It could be quite the test for the youngster, but could take him to the next level in his career.

World Series of Fighting may not yet have all the big names that the UFC has or the viewership that Bellator has, but it is rapidly growing into one of the premier promotions in the country. The opportunity is there to join Bellator as another option and WSOF is taking the steps to become noticed by fans and fighters alike. Through their first two events they’ve garnered some attention, but their third event should set their place at the MMA table.