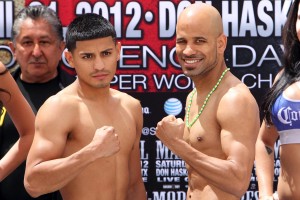 The boxers who will compete in an eagerly awaited World Championship Doubleheader tomorrow/Saturday,April 21, live on SHOWTIME® (9:30 p.m. ET/PT, delayed on the West Coast), made weight Friday on their first attempts at The Garden restaurant in El Paso, Texas.