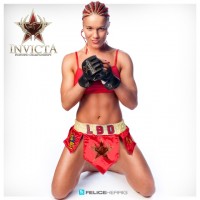 Herrig, a winner of four consecutive fights and protégé of MMA star Jeff Curran, will make her Invicta FC debut later this year.

“I couldn’t be happier than I am now, after signing with Invicta FC,” said Herrig.  “I have seen them do so much for women and really give them a chance to shine.  I don’t think anyone realized how big Invicta FC would become, and I am truly proud to say I have found a home with them.

“We are excited about bringing Felice, one of the brightest, young talents in the women’s field of MMA, under the Invicta FC umbrella,” said Invicta FC President Shannon Knapp.  “Felice has overcome a lot of stiff competition, thus far, during her career, and we are looking forward to seeing her perform against some of the top women in the world who fight for Invicta FC.”

A seasoned striker who began her fight career as a kickboxer, Herrig was initially introduced to a national audience as a competitor on Fight Girls, the Oxygen network reality series that followed a group of women Muay Thai fighters vying for greatness in Thailand’s national sport.  Herrig emerged victorious over a champion in Thailand before the series concluded.

In her last MMA start on March 28, Herrig earned a split decision victory over Heather Clark in Tampa, Fla.

Invicta Fighting Championships (www.invictafc.com) is a world championship Mixed Martial Arts (MMA) fight series dedicated to providing female athletes with a major platform to hone their skills on a consistent basis.  Founded in 2012 by longtime MMA executive Shannon Knapp and sports aficionado Janet Martin, Invicta is committed to pioneering the future growth of women’s MMA by promoting the best possible matchups between female competitors and identifying and developing future superstars of the sport.