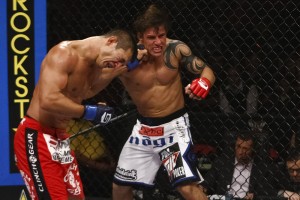 FRESNO, Calif. (Oct. 23, 2010) – On an exhilarating evening that featured action fights highlighted by crowd-pleasing victories by Fresno fan favorites Lavar Johnson and Billy Evangelista, Bobby Voelker (23-8), of Kansas City, Mo., evened the score with previously undefeated Roger Bowling (8-1) of Cincinnati with a second-round TKO (punches) in the main event Friday on STRIKEFORCE Challengers live on SHOWTIME® from the Save Mart Center.

In other results on the televised portion of an event presented by STRIKEFORCE and Rockstar Energy Drink: Johnson (15-3), of Fresno, scored an explosive 2:17, first-round knockout over Virgil Zwicker (9-2), of Temecula, Calif., in a heavyweight scrap; the comebacking Evangelista (11-0, 1 NC), of Fresno, won the fight of the night with a thrilling, crowd-pleasing, hard-fought three-round unanimous decision over Waachiim Spirit Wolf (8-7-1), of San Diego, Calif., in a catch weight bout at 165 pounds; Julia “The Jewel” Budd (1-0), of Sechelt, British Columbia, made an instant impression at 145 pounds, impressively winning her pro debut with a second-round TKO (punches) over previously unbeaten Shana Olsen (4-1), of Burnsville, Minn., and John Devine (5-2), of San Francisco, submitted (rear-naked choke) Brandon Cash (5-3), of Fresno, at 3:20 of the first round in a heavyweight match.

Voelker lost a technical decision to Bowling five months ago on STRIKEFORCE Challengers when an exciting encounter ended prematurely due to an accidental poke in the eye in the third round. Friday, however, the 6-foot, 31-year-old Voelker shook off a fast start from the aggressive-minded Bowling to triumph decisively in perhaps a career-best performance. It was Voelker’s ninth victory in 12 starts.

“I really trained hard and I really wanted to win this fight,’’ said Voelker after the match was stopped at 3:58 of the round. “I felt like I had something to prove. If they want a third fight, I’m for it, or I will just move on. I’m just very happy that all the hard work I put in morning, noon and night paid off like it did.’’

Johnson was fighting for the second time since he was gunned down while attending a family barbeque during the July 4 holiday in 2009. The 6-foot-2, 33-year-old survived three gunshot wounds sustained during the walk-by shooting that led to the death of a cousin.  A father of two young boys, Johnson spent 30 days in a hospital, fighting for his life, and several more months rehabilitating.

Friday, the hard-hitting Johnson, who has never been victorious via decision, looked as good as new as he earned his seventh consecutive knockout victory.

“This was just the kind of fight I wanted,’’ said Johnson after dropping the game Zwicker with a four-punch salvo that prompted the referee to step in and halt matters at 2:17. “I give Zwicker a lot of credit. He came to fight like I knew he would. But I wanted to make a statement. There are a lot of big-name heavyweights in STRIKEFORCE and I feel it’s time I get my shot at one of them.

“I love fighting in Fresno. It is my home and the fans here are loud and totally into it. They are great.’’

Evangelista, making his first start since Nov. 6, 2009, won an absolute slugfest by the scores of 30-27 twice and 29-28. The extremely popular local fighter is a natural 155-pounder and Friday’s fight was at a catch weight of 165. The naturally bigger and stronger Spirit Wolf, who fights at welterweight (170), used his size and strength to his advantage throughout and some thought the scoring could have been closer.

“I love fighting in front of the hometown fans in Fresno,’’ the 5-foot-8, 29-year-old Evangelista said, “but this was a very hard fight. I wante generic viagra online.

This page appears to recieve a great deal of visitors. How do you advertise it? It offers a nice individual twist on things. I guess having something useful or substantial to give info on is the most important factor.