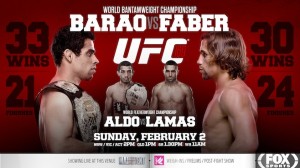 For most the first Sunday of every February is considered the biggest day in all of sports, but for the countless mixed martial arts fans it is the Saturday before the Super Bowl that they look forward to the most.

Saturday night in Newark, New Jersey the UFC takes over the Prudential Center with two title fights and a heavyweight bout that has fans salivating. Although the night’s co-headliners are newsworthy and worth looking over, it is the main event that has fans looking forward to this one.

In a rematch of 2012′s UFC 149, Urijah Faber takes on Renan Barao in a bantamweight showdown. Unlike last time, the UFC’s bantamweight title will be up for grabs and not an interim title. Barao was originally scheduled to face long-time champion Dominick Cruz, but a groin injury forced Cruz to drop out of the bout. Instead of this being another interim title bout, the UFC’s brass decided to place Barao in a match against Faber for the undisputed title.

Before their 2012 bout, Faber (30-6) had come off an impressive submission victory but it was his first since a loss to Cruz. This time, Faber comes in riding the most impressive win streak of his career. Four straight wins in 2013, three of which came via submission and each more impressive and dominant than the last. It is understandable why he was chosen as the replacement to headline UFC 169 against Barao.

Barao (31-1, 1 NC), who is still considered interim champion, has successfully defended his title twice in 2013 and is looking to continue that streak in 2014. Both wins have come via finish (TKO and a submission) and are part of one of the most impressive streaks MMA has ever seen. Barao’s lone loss came in 2005 in his first ever professional bout. The only other blemish on his record is a no contest in 2007.

The UFC’s bantamweight division is pretty wide open and the top two of the division meet up for the undisputed title this Saturday. Not only are they 1-2 in the rankings, but they’re widely considered two of the best at 135 pounds. It’s been rare that the UFC has a main event where that is the truth, but for one night the promotion has gotten it right. And, the sports world will be honed in on what they have to offer.

With the Super Bowl the next day and just a few blocks away, the UFC has an opportunity to expand their fan base with their very own “Super Saturday” and they’ve chosen a great rematch to lead the way.