PORTLAND, Ore. (July 12, 2012) – Luke Rockhold will defend his STRIKEFORCE® middleweight title against Tim Kennedy in the main event of a World Championship Doubleheader this Saturday, July 14,  live on SHOWTIME® (10 p.m. ET/PT, delayed on the West Coast) from the Rose Garden.

In the co-feature scheduled for five rounds, Tyron Woodley and Nate Marquardt will clash for the vacant STRIKEFORCE Welterweight crown. Other matches on the SHOWTIME telecast: Lorenz Larkin vs. Robbie Lawler (middleweights) and Roger Gracie vs. Keith Jardine (middleweights). 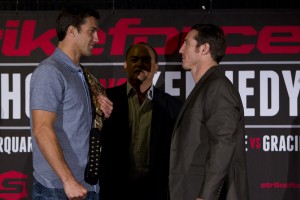 “When I look at this fight card from top to bottom this is an amazing card. Like I’ve said, look at the fights that are on SHOWTIME EXTREME; those fights could really be on the championship part of the card. So from top to bottom STRIKEFORCE is going to deliver another world class match up.’’

(Regarding the vacant welterweight title) “Nate Marquardt is an amazing fighter. If you’ve never seen him fight, he is a dangerous fighter. T-Wood (Woodley) is somebody who came up through the STRIKEFORCE organization on SHOWTIME. This is going to be his toughest test to date.”

(On being a fighter in STRIKEFORCE and the fan’s reaction) “I’m fighting to legitimize myself and keep bettering myself and to prove to everyone that I am one of the best in the world. They need to realize how good we (STRIKEFORCE fighters) are and if they haven’t seen that then they don’t know what they are missing. STRIKEFORCE guys are going over to the UFC and they are killing guys over there.’’

“We both want to demonstrate that we are the best fighter in our division. We are going to step in there and go 25 minutes to prove that. What we say before we step in there is irrelevant.

“I think the best way for me to represent the military community is for me to win this fight.”

“I think Nate has been around the block for a while. I think he brings a lot to the table. I think he is a well-rounded fighter. I think in this weight class he brings the most name recognition and more skills than the other guys. Most of the guys in the division I’ve already beat or I’ve beat someone who has beat them. I have no issue with him coming over and getting the title shot. ’’

(About Tyron’s style) “As a fighter I respect his skills. He is a great wrestler and that’s what he does and that’s what he should be using in his fights. The thing is, we’re there to fight. So when you’re a wrestler your job is to fight. And if you are going to use wrestling that’s great and can be super exciting for the fans. If you can get that guy down and ground and pound that’s great, but if you are going take that guy down and hold him and wait for the decision, that’s a different thing.”

(Regarding what kind of a fight he is expecting on Saturday) “I am expecting to knock him out. This layoff has rejuvenated me and I’m ready to go.’’

Tickets for STRIKEFORCE®: ROCKHOLD vs. KENNEDY, presented by Musclepharm, are on sale now and are priced at $125, $75, $50 and $40. Tickets are available at the Rose Quarter Box Office, all participating Safeway/TicketsWest outlets, by calling 877.789.ROSE (7673), or at RoseQuarter.com.