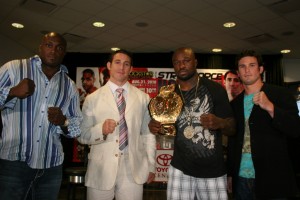 In a featured, televised bout, undefeated heavyweight rising star Bobby Lashley (5-0), will return to the cage against an opponent to be announced.

Tickets go on sale to the general public this Friday, July 16, at 10 a.m. CT at www.ToyotaCenterTix.com, by phone at 1-866-4-HOU-TIX, at select Houston area Randalls locations, and at www.strikeforce.com. Tickets will be available at 9 a.m. on Monday, July 19, at Toyota Center Box Office.

The undefeated Lawal, of Murfreesboro, Tenn., is a two-time NCAA Division I All-American and Big 12 wrestling champion for Oklahoma State University. He won the STRIKEFORCE title with a unanimous five-round decision over defending belt-holder Gegard Mousasi last April 17 on the CBS Television Network.

Prior to the convincing victory over the highly regarded Mousasi, the colorful, charismatic 30-year-old, 6-foot Lawal won his STRIKEFORCE debut via first-round knockout of “Iron” Mike Whitehead on Dec. 19, 2009, at STRIKEFORCE: Evolution in San Jose.

A winner in five of his last six starts, Brazil’s Feijao is coming off a crushing first-round knockout over Antwain “The Juggernaut” Britt at STRIKEFORCE: Heavy Artillery last May 15 in St. Louis on SHOWTIME.  Feijao trains out of the famed Black House camp with, among others, Anderson Silva, Lyoto Machida and Antonio Nogueira with Silva, the current UFC middleweight champion, serving as his striking coach and former champ Nogueira working as his grappling coach.

The only losses on Cavalcante’s resume came in 2007 on a disqualification and in a shocking upset to late replacement and dangerous veteran Mike “Mak” Kyle on June 6, 2009.  Since the loss to Kyle, the 6-foot-1 Cavalcante has rattled off two consecutive knockouts: a second-round KO of Aaron Rosa at a STRIKEFORCE Challengers event in Kansas City on Nov. 20, 2009 and the Britt blowout.

Jacare (pronounced “Jock-a-ray’’) is a world-class submission specialist and Brazilian Jiu-Jitsu black belt who is coming off a hard-fought unanimous decision over Joey Villaseñor at STRIKEFORCE: Heavy Artillery.  In his outing before last, the world-renowned grappler submitted (arm triangle choke) 1996 Olympic Games Greco-Roman medalist Matt “The Law” Lindland on Dec. 19, 2009.

The 6-foot, 30-year-old Jacare’s only defeats came in his first career match in 2003 and to former STRIKEFORCE champ Mousasi at the Dream 6: Middleweight Grand-Prix Final in 2008.

An American military hero, Kennedy, of Austin, Tex., is fresh off a first-round submission (rear-naked choke) of Trevor Prangley on June 16 at STRIKEFORCE: LIVE at Nokia Theatre L.A. LIVE in Los Angeles.   The 5-foot-11, 30-year-old Kennedy is a United States Army Special Forces sniper with the 19th Special Forces outfit based in San Antonio. He has toured the Middle East multiple times and earned the Army’s Bronze Medal Star medal for valor under fire.

Kennedy has split two fights with Jason “Mayhem’’ Miller, while his only other defeat came to Scott “Hands Of Steel’’ Smith in his pro debut on Aug. 31, 2001.

A confident, prolific striker, the 5-foot-11 Noons outlasted Conor Heun in his STRIKEFORCE debut via split decision in an all-out slugfest in his last fight, also at STRIKEFORCE: LIVE in L.A.  Noons, who is also a professional boxer, is the last fighter to defeat current STRIKEFORCE welterweight champion Nick Diaz – a bloody first-round knockout in 2007.

The 27-year-old Noons has won five consecutive fights and is 8-1 in his last nine outings. His last defeat came to Charles “Krazy Horse’’ Bennett on Feb. 10, 2007, in the opening bout on the historic first MMA fight card ever broadcast on network premium television (SHOWTIME).

Gurgel holds a black belt in Brazilian Jiu-Jitsu, but prefers to stand and exchange strikes rather than utilize his submission skills, which makes all his fights explosive and entertaining.  The 5-foot-7 Gurgel has never lost a fight via knockout and has only been submitted twice in an eight-year MMA career.

Gurgel, 33, is coming off an exciting, extremely tough decision loss to undefeated prospect Billy Evangelista on Nov. 6, 2009, at a STRIKEFORCE Challengers event in Fresno, Calif.  Before the loss to Evangelista, Gurgel won a unanimous decision victory over Heun on June 19, 2009 at a STRIKEFORCE Challengers event in Kent, Wash.

The 6-foot-3, 250-pound Lashley is a former collegiate wrestling star for Missouri Valley College who competed in both the WWE Raw and SmackDown! shows in 2005 and 2006.  He made his MMA debut in December 2008.

In his last fight and STRIKEFORCE debut, Lashley, 33, scored a first round TKO over Wes Sims at STRIKEFORCE: Miami on Jan. 30, 2010.  Prior to that, the former professional wrestling superstar pulverized the 6-foot-5, 350-plus pound goliath Bob Sapp.

Lashley’s WWE and TNA wrestling career has helped make him a well-known figure in the sports and entertainment world.

What the fighters said Tuesday:

“Feijao likes to bang so this is going to be an exciting fight.  I’m going to show you all some new things I’ve been working on.”

On coming into his first fight as champion: “The approach doesn’t change.  Going into every fight, I feel like both a champion and a challenger because I challenge myself in training, but I’m always champion in my mind.   So nothing is going to change for this fight.

“I watch about 10-15 fights a day.  I’m always studying guys and learning their weaknesses.”

On how his military experience prepared him mentally and physically for MMA competition: “This is just fighting.  (In the cage), there’s a guy in a black shirt wearing latex gloves who’s going to protect me.  It’s much different than battling a guy who’s hiding behind a rock with a cell phone, waiting to blow me up.  So, this is fun.  I love fighting.  It’s a huge sport and I’m a huge fan of it.  It’s totally different.

“I’m proud to say that I’m a Texan now.  I live in Austin.  I hope that all of Texas will come out to support me as I fight to win the belt.

“As your career progresses, every next fight is the most important one.  After I beat Jacare and have the title, they’re going to say ‘Is this the most important fight of your career?’  I take every single fight with extreme seriousness and I take Jacare very seriously.  I have great respect for him as an athlete and as a fighter.  He’s very talented.  It’s a tough fight.  I don’t know if he’s my toughest opponent, but it’s nice to be able to train full time, so this is going to be a tough fight for him.”

“I think I’ve progressed well.  The Bobby Lashley who fought my first fight is completely different from Bobby Lashley now.   I’m anxious to get back out there.   I had a little setback and when I finally got cleared. I called (STRIKEFORCE CEO Scott) Coker and begged him to be on this card.”

“As far as comparing myself to the other heavyweights, we’ll see real soon.  I’ll have opportunities to fight those guys in the next year.”

“I’m very excited to come back to Texas.  I finished high school here.  My mom and my dad are here.  The fans are awesome here.  I did open-hand Pancrase down the street from here eight years ago before MMA was even big, so I know how it was back then so I’m super excited to be back here.

“I think I’m going to keep the fight standing and keep it exciting.  Whether you want to call it a war or whatever, it’s going to be like all my other fights.  I’m going to pick him apart and take him out.

This is a really good read for me, Must admit that you are one of the best bloggers I ever saw.Thanks for posting this informative article.