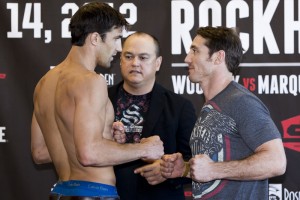 All the fighters who will compete on a STRIKEFORCE® World Championship Doubleheader tomorrow/Saturday, July 14, live on SHOWTIME® (10 p.m. ET/PT, delayed on the West Coast) from the Rose Garden in Portland, Ore., made weight Friday.

Luke Rockhold, who will defend his STRIKEFORCE middleweight title against Tim Kennedy in the main event, and Lorenz Larkin, who meets Robbie Lawler in a featured non-title televised fight, required two attempts at the scale. 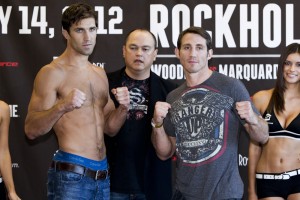 Rockhold, shown facing off with Kennedy, weighed the division-limit 185 pounds after coming in one-half-pound over. After jogging for about 15 minutes, he made weight on the second try. Kennedy weighed 184 1/2 pounds. 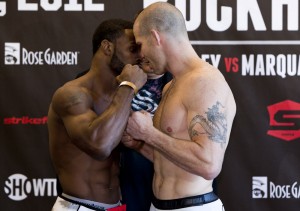 Tyron Woodley (left) and Nate Marquardt get up close and personal and then pose one day before their fight for the vacant STRIKEFORCE welterweight crown. Both fighters weighed 169 1/2 pounds. 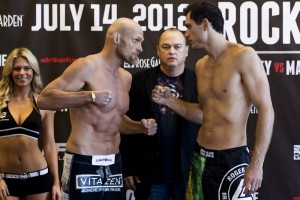 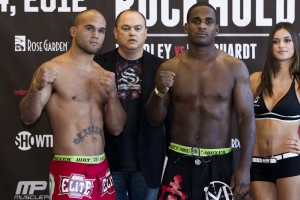 Lawler (left) and Larkin each weighed in officially at 186 pounds. Larkin was over by a half on his first try but returned quickly to make the weight. 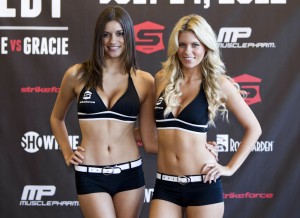 Tickets for STRIKEFORCE®: ROCKHOLD vs. KENNEDY, presented by Musclepharm, are on sale and are priced at $125, $75, $50 and $40. Tickets are available at the Rose Quarter Box Office, all participating Safeway/TicketsWest outlets, by calling 877.789.ROSE (7673), or at RoseQuarter.com.