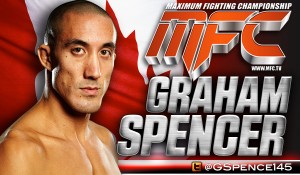 The Maximum Fighting Championship will be without rising star and lightweight champion Graham “Cracka” Spencer for an extended period due to injury.

Spencer originally suffered the injury in training camp prior to his title fight against Mukai Maromo at MFC 36 – a bout in which the Nanaimo, B.C., product would submit his foe to claim the MFC’s lightweight belt. Spencer (10-1) put the difficulties aside to secure a third-round submission victory, but the pain never went away. In the end, it was discovered the Spencer fought with a torn labrum in his right shoulder.

“I couldn’t wrestle for the last month of my camp,” recalled Spencer. “After the fight I went to the doctor and told him about how I was having trouble and he thought I had a bulging disc in my neck so I got a bunch of tests done but nothing was wrong.

“So I got my shoulder x-rayed and it was separated. I did six weeks of rehab for that and tried to go back to training but it still didn’t feel right. Finally I just went and got an MRI and that’s how they found the tear.”

It’s unclear just how long Spencer will be sidelined. First and foremost, he needs to get on the operating table and get surgery to repair the tear.

“I’m very frustrated,” offered Spencer. “The first surgeon I talked to had a two-year waiting list. I’ve got a consult with a different doctor on July 31.

“If I don’t like what he says I’m going to just get it done privately. For now, I’m just working to get enough hours so I can get disability while I’m rehabbing. It doesn’t really bug me too bad unless I wrestle or lift weights but there no way it can hold up to training every day.”

The injury shelves Spencer’s desire to not only defend the lightweight belt but also his attempt to become the MFC’s first double-belt holder with his quest to win the featherweight title as well. Spencer is currently on a five-fight winning streak which includes two wins over Maromo and a decision victory over Shane Nelson at MFC 35.

“It couldn’t have happened at a worse time,” said Spencer, who was training with Team Alpha Male. “I was going to rent a place in Sacramento so I could be training there all the time and my wife could come down when she was available.

“Plus the MFC has been getting me so much recognition. Now I’m going to have to build it all up again.”