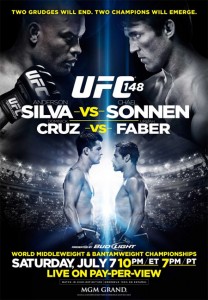 Originally, Silva vs. Sonnen II was set as the main event for UFC 147 in Brazil on June 23rd but since the United Nations scheduled a conference in Rio De Janeiro during the same week, UFC decided to move Silva vs. Sonnen II to UFC 148 in Las Vegas on July 7 as the main event.  Also scheduled on the UFC 148 card is Urijah Faber vs. Dominick Cruz for the bantamweight belt as co-main event, Rich Franklin vs. Cung Le, Tito Ortiz vs. Forrest Griffin  for the third time, and Michael Bisping vs. Tim Boetsch. UFC 148 will be one of the most spectacular fight cards to date.