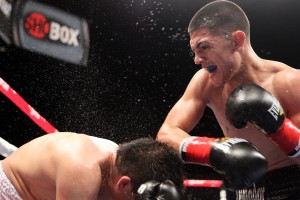 Catch the Replay on Tuesday, March 20 at 10 p.m. ET/PT on SHOWTIME EXTREME® 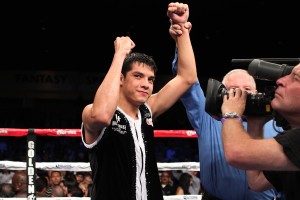 Figueroa returned to ShoBox for his second appearance on the series and earned another stoppage. In his usual style, the all-action pressure fighter from Weslaco, Texas dominated Ayala with power shots for nearly two full rounds before the fight was halted. Ayala, of Morelos, Mexico, seemed to deal with the head shots, but the body blows proved too much. Figueroa landed a left to the gut in the first that staggered his opponent, but it was the left hook to the liver in round two that spelled the beginning of the end. Figueroa, who threw more body punches than his opponent by a tally of 19 to 2, followed the liver shot with a barrage of shots to finish the taller Mexican. Ayala attempted to hold but Figueroa let him drop to the canvas and referee Lou Moret began the count. Ayala returned to his feet by the count of nine but wobbled backwards and Moret ended the contest at 2:53.

“It surprised me when he didn’t try to box because he is a pretty tall guy,” said Figueroa. “Once he started throwing power shots with me, I knew it wouldn’t last long. He had decent power so I was careful of his wild shots but I never thought the fight would make it past the third or fourth round.”

In the opening bout of the night, Caballero, of Coachella, Calif., added another win to his perfect record but it didn’t come easy. The charismatic 21-year-old enjoyed the comforts of fighting amidst the cheers from his hometown crowd and won the first several rounds over a tentative Araiza, of Tecate, Mexico. Poise and good hand speed carried Caballero until Araiza picked up his pace, aggression and punch output in the sixth round. Araiza tagged Caballero with many hard shots in the second half of the bout and took Caballero to the 10th round for the first time in his young career. The late surge by Araiza brought excitement to the fans but not enough rounds to come back against Caballero. The victory earned Caballero the vacant NABO bantamweight title in his 118-pound debut.

“This was more of a learning experience for me,” said Caballero after the bout. “We knew he was going to try to do a couple of things in the ring and I let him do them a couple of times. That’s my mistake so we’re going to go back to the gym and keep working so we can come out even better next time.”

This ShoBox doubleheader was presented by Golden Boy Promotions and sponsored by Corona, DeWalt Tools and AT&T. The telecast will replay on Tuesday, March 20 at 10 p.m. ET/PT on SHOWTIME EXTREME® and be available on SHOWTIME On Demand from March 19 through April 15.