Sefo leading by example at WSOF 4 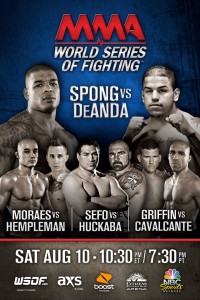 Becoming one of the premier MMA promotions takes time and a strong foundation from the top on down. This Saturday night in Ontario, CA. World Series of Fighting takes another big step forward in its growth with their fourth event.

For promotions to reach the type of glory they envision it takes a strong belief from the person in charge and what better way to do so than to step inside the cage? Never heard of a president willing to literally fight for his company, well meet Ray “Sugarfoot” Sefo. The WSOF president, and former K-1 champion, is making his promotional debut against Dave “Bad Man” Huckaba in a heavyweight bout. Sefo is one of the rare promoters that has been a fighter and knows the mentality and passion it takes to step inside the cage. He’s 2-1 in his MMA career, but has won 56 kickboxing bouts and countless championships. He faces off against Huckaba who’s a veteran of 25 professional MMA bout, winning 20 of them, and is quite the knockout artist.

Sefo might be suffering some cage rust as he hasn’t fought since a 2011 loss to Valentijn Overeem in Strikeforce. Huckaba has been quite active. He’s already fought and won once this year and has gone 9-1 since 2010. Eight of those nine wins were stoppages, but Huckaba has jumped between numerous promotions. With an ever-expanding roster this could be Huckaba’s opportunity to latch onto a high-level promotion.

Sefo’s debut may be a great selling point to viewers, but there always needs to be substance to any fight card. This event is no different. The night’s headliners are four of the most noteworthy fighters to step foot into the WSOF cage.

Saturday’s co-main event stacks up two of the promotion’s top lightweights. Gesias Cavalcante makes his third promotional appearance as he welcomes in Santa Rosa’s Tyson Griffin who makes his debut for WSOF. Griffin, a former UFC lightweight contender, is coming off of a win against Efrain Escudero at RFA 4 last November. He’s 2-1 over his last three fights and has been training with the likes of Josh Thomson and Gray Maynard since making the move to American Kickboxing Academy in San Jose.

Cavalcante (1-1 in WSOF) lost his last fight via doctor stoppage at WSOF 2 against Justin Gaethje. He’s only won two of his last five bouts, but has always been feared for submission ability. Eight of his 17 career wins have come via submission, including his WSOF 1 win over TJ O’Brien that came via the heel hook. It will be Cavalcante’s submission going up against Griffin’s wrestling in this bout. Whichever fighter is able to impose their will the best will walk away with a victory under their belt.

There have been numerous moments in the history mixed martial arts that have excited crowds, but in WSOF those moments have been few. Tyrone “King of the Ring” Spong hopes to give fans such excitement as he steps foot into the WSOF cage for just the second time. The kickboxing world champion is coming off an impressive first-round knockout victory over Travis Bartlett at WSOF 1. Fans and the MMA community have been anxiously awaiting Spong’s return to the cage. The light-heavyweight has a rare combination of speed and striking that makes his deadly at 205. He’s shown above average power in kickboxing and many expect that glory to help him inside the of mixed martial arts. Spong’s opponent, Angel Deanda, hopes to spoil the “King’s” return.

Deanda is on a four-fight win streak and holds a career record of 11-2. He’s won 10 bouts via TKO/KO and could be quite the match for Spong if the two stay standing. Neither has a distinct advantage on the ground, which leads many to believe that this bout will be more about the striking than anything else. This meeting of light-heavyweights may come down to which fighter has the better cardio. That will likely give the upper hand to Spong, but weirder things have happened in MMA.

Saturday’s event will end on a great note as the night’s three biggest fights are slated for the back of the show, but there’s one fighter that is more than capable to steal the limelight. Undefeated “Notorious” Nick Newell makes his WSOF debut in a lightweight bout against Keon Caldwell. Newell gave MMA one of its best moments last year after winning the XFC lightweight championship belt. For those unaware of Newell, he has become one of the most popular fighters for his ruthless style and that he’s done so much with half of his left arm missing. This “disability” has become an advantage and has helped him reach great heights.

Newell, Sefo and Spong are just few of the reasons to pay attention to World Series of Fighting. The fourth event of the promotion’s short history will continue the growth of MMA and put a limelight on fighters that would’ve been missing out otherwise.