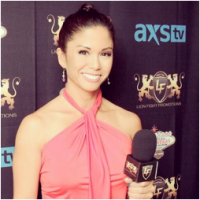 “We are pleased to announce Chinggay Andrada as the first ever female ring announcer for Lion Fight, and that she will be the voice of our Muay Thai events starting with Lion Fight 18 this Friday night,” said Kent. “Chinggay is well known in our sport and with her star power, presence and personality she will not only be a great announcer but also a fantastic ambassador for Lion Fight.”

Prior to being named ring announcer for Lion Fight, Andrada has worked as a reporter and video journalist for the Muay Thai organization the past two years. Previously, she was famed for her role as a fitness coach on “The Biggest Loser” in her native Philippines and also for being the cover model of many fitness magazines including FHM.

“I’m excited to be making history as the first female ring announcer for Lion Fight, the biggest and best Muay Thai events promotion in the world,” said Andrada. “I’ve always wanted to do more with Lion Fight, so when Scott Kent asked me to take on this new role I immediately said yes. I’m also thrilled that my first event will feature the legendary fighter Yodsanklai Fairtex – just to be in his presence is an honor – and to announce his name will be a moment to remember forever. Thank you Scott Kent and Christine Toledo for this opportunity.”

Based in Las Vegas, Nevada, Lion Fight Promotions, LLC is the world’s premier Muay Thai organization. Founded in 2010 by owner and Chief Executive Officer Scott Kent, Lion Fight is the most active promoter of Muay Thai events and stands as the largest standup combat sports organization in North America. Sponsored by Singha Beer, the exclusive and official beer of Lion Fight, its full rules Muay Thai events are televised live nationally to over 43 million homes as part of AXS TV’s long-running Friday Night Fights series. The first-ever professional combat sports organization to be included on the UFC International Fight Week schedule of events, Lion Fight is dedicated to growing Muay Thai in America and to presenting world-class events stacked with the best fighters in the sport.