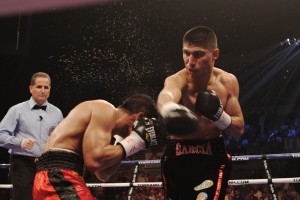 Catch the Replay Today/Sunday at 9:30 a.m. ET/PT on SHOWTIME® and

Although Lopez, of Caguas, Puerto Rico, attempted to alter his game plan, he was unable to alter the outcome. The popular Puerto Rican traded his brawling tendencies for boxing to start the bout but was unable to derail the relentless Salido, of Ciudad Obregon, México.

The two men traded blows for much of the fight with Salido often causing more damage. In the fifth round, Salido rocked Lopez and looked to capitalize when he walked into a perfectly timed short left hook from Lopez that sent the surprised Mexican to the canvas. The crowd roared and Lopez seemed to regain some of his confidence, but Salido refused to let up.

Round eight proved to be a short-lived candidate for Round of the Year as round nine eclipsed it only minutes later. The fighters stood toe-to-toe for an entire three minutes, exchanging power shots and displaying courage under fire.

In round 10, Salido – swollen but unfazed – stunned the capacity crowd when he devastated Juanma with a succession of power punches to the head. The last in the series of punches floored Lopez. A true warrior, Lopez returned to his feet but referee Roberto Ramirez, Sr. deemed him unable to fight and stopped the contest only 32 seconds into the round.

“This is how I planned this fight,” said Salido. “I knew it was going to be a very tough fight. We both competed punch for punch. I’m just lucky he’s the one that fell.”

“He hit me hard but I could still continue,” said Lopez after the fight. “I was dominating the fight. It was a tough fight but I was winning.” 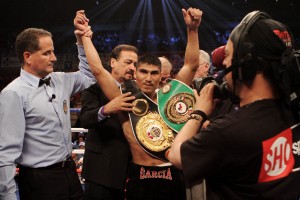 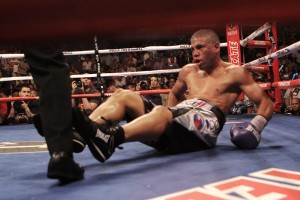 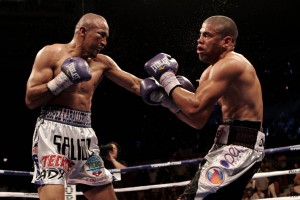 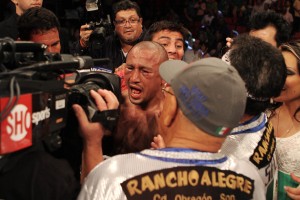 As simply put by Salido, “This was a classic in the long rivalry between Mexican and Puerto Rican fighters.”

Opening up the SHOWTIME telecast, featherweight Garcia slowly raised the heat on his opponent from simmer to burn. A tentative beginning gave way to a calculated, masterful performance by one of boxing’s up-and-comers. The remarkably grounded Garcia, of Oxnard, Calif., put rounds in the bank early against his Filipino opponent. By round seven, Garcia began to chip away, stunning Concepcion with a stinging right hand and flooring him with a one-two combo. Concepcion made it off the canvas – but not out of the round. At 2:33 in the seventh, referee Luis Pabonstopped the fight after Garcia’s punches began to land cleanly without retaliation.

Continuing to prove that he is a finisher  with 24 knockouts in his 28 professional victories, Garcia said after the bout, “I think I showed everybody my skills and I was able to put him out when the time was ready.”

As to what’s next for Garcia, he responded, “I would like to face any of the champions at 126.” 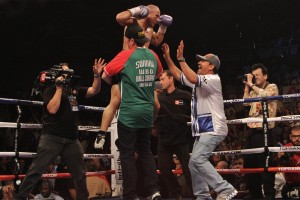 Earlier on SHOWTIME EXTREME®, Jose Gonzalez (19-0, 14 KOs), of Toro Baja, Puerto Rico, scored a technical knockout at 1:12 of round eight over the late replacement Hevinson Herrera (15-9-1, 10 KOs), of Miami, Fla. Following a slow start, Gonzalez sped up his pace and teed off on Herrera in the middle rounds, scoring a knockdown just before the end of round six. In round eight, the referee stopped the lightweight fight schedule for 10 as Gonzalez began to unload on his opponent.

Flyweight  McWilliams Arroyo (11-1, 9 KOs), of Fajardo, Puerto Rico, scored a 10-round unanimous decision overLuis Maldonado (38-7-1, 29 KOs), of Baja California, Mexico. Showing his skills on national television, the young Puerto Rican dominated much of the fight against the rugged Mexican and won by the scores of 99-91 two times and 98-92.

The event was promoted by Top Rank, in association with PR Best Boxing Promotion, Zanfer Promotions and the city of San Juan.