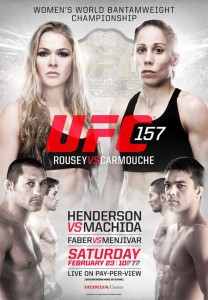 For almost 20 years, the UFC has been the home of some the best fighters in the history of mixed martial arts. Greats like Royce Gracie, Mark Coleman, Randy Couture, Anderson Silva and Dan Severn have stepped through the octagon doors. But in the almost two decades of operation the promotion has not had a female fighter step through the doors.

That all ends on Saturday, February 23 as the UFC’s first two women fighters headline UFC 157 in Anaheim. The card, which includes Dan Henderson vs Lyoto Machida and Urijah Faber vs Ivan Menjivar, is headlined by UFC Women’s Bantamweight Champion Ronda Rousey putting her title and 6-0 record on the line against 8-2 Liz Carmouche.

Rousey has become the face of Women’s MMA and, as the former Strikeforce women’s bantamweight champion, she was ceremoniously named the UFC’s first women’s champion. With the weight of the women’s division on her shoulders, Rousey has not shied away from the limelight and has understood her role. But, she is no longer the lone woman fighter in the UFC.

There were questions surrounding the expansion of the women’s bantamweight division and when others would be added. Some speculated the UFC would wait to see how this event did before announcing more women fights, but the promotion quieted that speculation as they announced Miesha Tate and Cat Zingano would square off at the The Ultimate Fighter 17 Finale in April.

Even the build-up to the UFC 157 main event, which many believed would revolve around Rousey, has focused just as much on Carmouche. The former Marine, she served three tours in the Middle East, is looking to spoil the plans of the UFC of building the women’s division around Rousey.

As the sixth-ranked women’s bantamweight in the world, many believe Carmouche did not deserve a title shot. But, “Girl-Rilla” is out to prove the doubters wrong. Not only is she a former Marine, but Carmouche has another distinction that separates her from Rousey. Liz is the first openly gay professional fighter in MMA. It’s a fact she does not hide, as seen by her willingness to talk about it on “UFC Primetime”. Instead, she boasts about it. Calling her fans “Lizbos” and even “hitting on” Rousey during press shoots.

The fate of Women’s MMA was one few would discuss and, if they did, it would not be optimistic. Rousey changed those fortunes. She put Dana White, the UFC and all of MMA on notice with her tenacity and personality. For it to succeed, fighters like Carmouche, Tate and Zingano will have to step up as well.

Unlike 20 years ago, there’s no question that these women belong in the octagon. The question now is, can they put on quality fights? Fans will get there first answer this Saturday night.