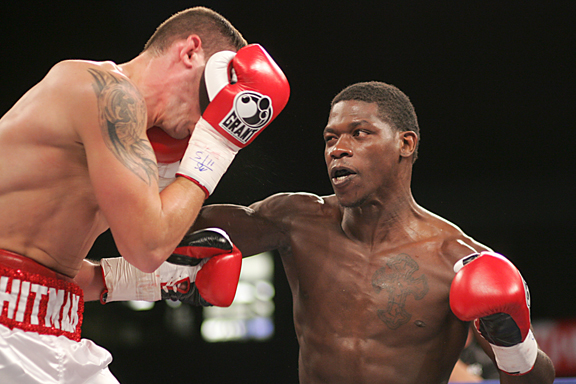 FARGO, N.D. (Nov. 6, 2010) – On the eve of the win-or-go-home Group Stage 3 matchup between 168-pounders Allan Green and Glen Johnson in the Super Six World Boxing Classic on SHOWTIME®, offensive-minded Edwin “La Bomba” Rodriguez TKOed James McGirt Jr. in hopes to send a message and become the division’s top prospect.  In the co-feature bouts at Scheels Arena in Fargo, N.D., Aaron Pryor Jr. won a unanimous decision over Dyah Davis and Marcus “Too Much” Johnson dominated Kevin Engel en route to a third-round TKO. 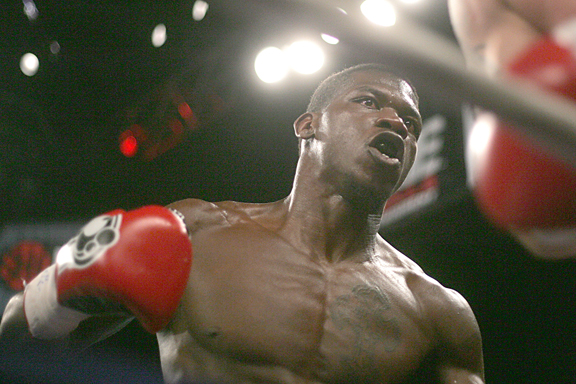 Despite taking a sizable step up in opposition, Rodriguez’ (17-0, 13 KOs) ascent to stardom wasn’t slowed and neither were his hands in his first ShoBox main event. The fan-friendly, give-and-take puncher from Worcester, Mass, by way of the Dominican Republic, delivered a trademark action-packed performance. McGirt (22-3-1, 1 NC, 11 KOs) from Vero Beach, Fla., defended well in the early rounds but was unable to establish a sustained offensive attack. By rounds seven and eight, Rodriguez began teeing off on his tired opponent. Referee Mark Nelson called the fight a TKO in ninth round after McGirt’s lack of punches transformed him into a 168-pound heavy bag. Rodriguez is winning, winning impressively and now winning impressively over name opponents – three things that prospects need to do to become contenders.

Some 34 years after Aaron Pryor lost his spot on the U.S. Olympic team to Howard Davis, his son Aaron Pryor Jr. (15-2, 11 KOs), of Cincinnati, avenged the loss by defeating Davis’ son, Dyah. The lanky, 6-foot-4 Pryor with an 80-inch reach established his long jab to keep away the shorter Davis (18-2, 9 KOs) of Boca Raton, Fla. Bloodying Davis with a straight right in the sixth, Pryor maintained control through most of the eight scheduled rounds. Pryor won a unanimous decision with scores of 78-74 and 79-73 two times.

[...]in the following are a couple of hyper-links to online websites I always link to because we believe they will be worthy of visiting[...]…

thanks for a fantastic…

A lot of thought-provoking ideas that really took me by surprise. I share thoughts on many points. Really made me think. Although unrelated to my blog, worth linking to…

Getting started in Forex trading says:

What a great quality article! This is awesome content with thoughtful viewpoints and persuasive content. I’ve learned some new things about this subject. I am totally impressed with writing style and presentation. Although unrelated to my blog, worth l…