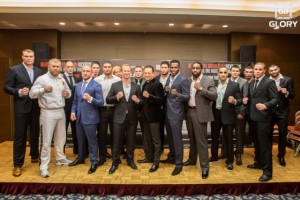 CBS Sports Network (U.S), The Fight Network (Canada), SkyPerfect (Japan), NicoNico (Japan), Premier Sports (U.K.) Sony Six (India), Setanta Africa (Africa), Canal+ (France), BandSports (Brazil), SkyMEX (Mexico and Central America) and EuroSport (Europe) are amongst the television networks that have signed on to showcase the historic event that will award a total of $600,000 in prize money to its tournament competitors.

“We are thrilled to be able to deliver this monumental night of GLORY championship kickboxing to millions of fight fans all over the world, so that they can be a part of the single biggest event in the history of our great sport,” said GLORY CEO Marcus Luer.  “Any of the 16 tournament fighters could headline an event anywhere in the world and, to be able to have them all battling it out in one tournament is truly an amazing thing that every fight fan should have the opportunity to witness.”

In the First 16, or opening round of the tournament, world No. 1 ranked heavyweight and No. 1 tournament seed Semmy Schilt (39-6, 18 KOs), an enormous, 2.12 meters/6-foot-11 Karate black belt who won the GLORY heavyweight title earlier this year, will face world Muay Thai champion Brice Guidon (28-7, 4 KOs) of France.  .

No. 2 seed, hard-hitting Gokhan Saki (77-15, 53 KOs) of the Netherlands will square off with power puncher Raomoru of Japan.

The draw to determine the First 16 matchups was held on Nov. 20.  GLORY tournaments use a seeding system similar to that used in tennis and other tournament format sports.

To ensure that tournament fighters are not exposed to unnecessary risk of injury, a ‘Best of Three’ rule mandates that any fighter who wins the first two rounds of a First 16, Quarterfinal or Semifinal bout is declared the winner of the bout and advances to the next stage of the tournament.

For more information go to www.gloryworldseries.com.

About GLORY:
GLORY World Series (www.gloryworldseries.com) is the world’s new premier kickboxing league, producing live events across the globe and offering up to $1,000,000 in prize money to the winners of one-night, 16-man ‘Grand Slam’ tournaments, which are open to only the best fighters in each weight class. The fight series also includes 8-man ‘Slam’ tournaments and events with traditional, single bouts.
With television deals spanning every continent, online live video streaming of all shows and the world’s largest online martial arts library, GLORY is one of the world’s most widely distributed sporting organizations.
Owned and operated by Glory Sports International (GSI), the organization has offices in the UK, Holland, Tokyo, Malaysia, Singapore and soon in the USA. Its personnel include an unprecedented mix of accomplished entrepreneurs and senior level executives from the diverse worlds of finance, sports marketing, television and martial arts fighting.