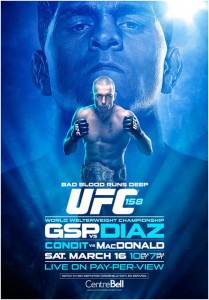 With 2012 in the rear view mirror and ending with UFC 155, there’s only one thing left to do…take a quick look at the bouts that 2013 has to offer and which ones are worth waiting for.

Taking a glance at the bouts announced for the new year, there are several that pop out right away. But, there’s only five that are capable of living up to the hype. In my opinion, they are (in no particular order);

1) Light-heavyweight Champion Jon Jones vs Chael Sonnen (UFC 159 on April 17): Ever since it was announced these two would coach season 17 of The Ultimate Fighter, it made many scratch their heads and wonder how Sonnen earned the title fight that would follow. To this date, nobody is truly certain but there is a buzz surrounding the reality show that has been missing. Sonnen has not fought at 205 in years and is coming off of a discouraging loss to Anderson Silva at UFC 148. Whatever the reason may be, this could be one of the highest selling pay-per-views of the year and it will be because of the main event.

2) Welterweight Champion Georges St-Pierre vs Nick Diaz (UFC 158 on March 16): This kind of falls under the same “scratch your head in amazement” category as Jones-Sonnen, but Diaz is a former champion coming off a loss that he arguably won. Not only that, but GSP wants to fight Diaz. He answered Diaz’s trash talk by calling out the Stockton-native. GSP, who dominated Carlos Condit in his first bout after injury, has many challengers for his welterweight title but it is clear that his mind is set on dispatching Diaz. As we’ve seen in the past, a motivated GSP is a dangerous GSP and a quite exciting fighter to watch.

3) Women’s Bantamweight Champion Ronda Rousey vs Liz Carmouche (UFC 157 on February 23): Simply put this one is worth watching for the historic significance. Rousey is the first female fighter signed to a UFC contract and the first women’s champion in the promotion’s history. Rousey, 6-0, will defend her title in her first EVER match in the octagon. They hype for this bout won’t be built around a hatred or rivalry, but the debut of women’s mixed martial arts in the UFC and two great fighters putting on a show for MMA fans worldwide.

4) Vitor Belfort vs Michael Bisping (UFC on FX: Belfort vs Bisping on January 19): There might not be a title on the line in this bout of middleweights, but a win for Bisping means a title shot in his future. UFC President Dana White told media after UFC 155 that if Bisping defeats Belfort he will have next crack at UFC Middleweight Champion Anderson Silva. That brings the added intrigue to this bout that usually wouldn’t be there.

5) Interim Bantamweight Champion Renan Barao vs Michael McDonald (UFC on Fuel TV: Barao vs McDonald on February 16): With UFC Bantamweight Champion Dominick Cruz still nursing an injury, Barao will be making his first defense of his interim title against the up-and-coming McDonald in London on the 16th. Many thought McDonald had earned the right to fight Urijah Faber at UFC 149 for the interim title, but that opportunity went to Barao who defeated Faber in five rounds. Now it is McDonald’s turn to earn UFC gold. Plus with Cruz’s return date unknown, the interim title might stick for quite some time.