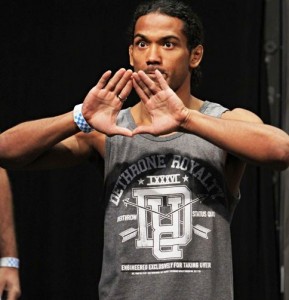 Benson Henderson successfully defended his lightweight title for the second time this year. What’s next for the champ?

As is the case with every fight card, there are fighters that come out looking great and ones looking mediocre. Even in defeat a fighter can put up a stellar performance and, sometimes in victory, a winner can look just as bad a loser.

On UFC on FOX 5 in Seattle, neither was the case. Every winner looked stellar and the losers looked less than great. With that said, let’s take a look at what I believe should be next for the winners and losers.

Nate Diaz: For years, Nate had lived in the shadows of his older brother Nick; he finally got his shot at a UFC title and what happened? He had, what could be called, his worst performance as a pro. After getting hit in the right eye, Diaz said his vision was blurred the rest of the fight. He was dominated in every aspect of the bout and, although he doesn’t drop too far, Diaz falls behind several others for a title shot. It may be far fetched, but a bout versus Gray Maynard could be very intriguing as there has been bad blood there for quite a while.

Shogun Rua: Rua may have lost to an absolute beast in Alexander Gustafsson, but the legend didn’t lose any of his drawing power. At only 31, Rua has had three great performances in a row. Although losing two of his last three, Shogun still deserves to remain in top-10 discussion. There are already quite a few light-heavyweights in slated bouts and it is unknown what will be next for Rua.

BJ Penn: Being able to last three rounds with one of the fastest rising stars in the UFC is difficult, doing so while being battered and bruised is unbelievable. Penn did just that when he faced MacDonald and went the distance. Penn showed the heart of a legend and tenacity of a man with a lot to prove. Coming back out of retirement might not have been the best idea, but it won’t be too far fetched to imagine a drop to lightweight could lengthen Penn’s career a little longer.

Mike Swick: For Swick the night ended Quick-er than he had hoped. Coming off his first win after nearly two years away from the octagon, Swick looked to build some positive momentum. That notion ended with a quick left-right combination courtesy of Matt Brown. Even in defeat, Swick fans might get a positive out of this loss. A bout against Erick Silva could finally take place. Silva and Swick were slated to fight at UFC 134 before Swick pulled out due to a knee injury. Now with both fighters coming off of losses there could be no better time than now to make that bout.

Benson Henderson: “Smooth” retained his lightweight championship by a dominating Nate Diaz in route to a unanimous decision victory. There are few prominent challengers that have separated themselves from the rest of the deep lightweight division. Several have claims to a title shot. Names like Gray Maynard and Anthony Pettis, but let’s think outside the box. With Strikeforce folding after next month, challengers like Gilbert Melendez and Pat Healy could stake claim to a title shot. But with free agent lightweight Eddie Alvarez still on the market, it should not surprise anyone if Zuffa makes an offer for the former Bellator champ and give him an instant shot at Henderson.

Alexander Gustafsson: Gustafsson had his most impressive victory of his career over the legend Shogun Rua. As great as it would be to see “The Mauler” take on the winner of Jon Jones-Chael Sonnen, Gustafsson will likely be waiting a little longer to stake claim at a title shot. UFC President Dana White did mention that if need be, Gustafsson could jump in and face either Lyoto Machida or Dan Henderson. A good match for Gus could be Phil Davis. Davis was slated to face Forrest Griffin at UFC 155, butGriffin was sidelined with an injury.Davis is awaiting a new opponent and why not set these two in a bout on a card in 2013?

Rory MacDonald: After soundly defeating BJ Penn, MacDonald called out Carlos Condit. He asked and he received. White said he’d be willing to set that rematch up if Condit were open to the idea. There’s nobody else worth seeing MacDonald fight simply because he is a fight or two away from title contention and is not willing to fight teammate, and welterweight champion, Georges St-Pierre.

Matt Brown: If anyone on this card helped their case, it was “The Immortal” Brown. His second-round KO of Mike Swick ended what was a dominant performance for Brown. There’s a long list of welterweights itching for a fight and Brown is more than likely to give any one of them a run. Guys like Josh Koscheck, Jake Ellenberger and even Martin Kampmann could be possible opponents for Brown.