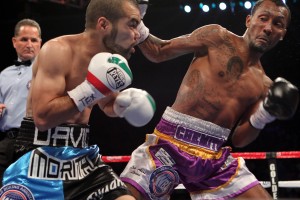 In the co-feature, Anselmo Moreno, the slick and talented Panamanian world champion, cruised to victory over David de la Mora with a ninth-round technical knockout. 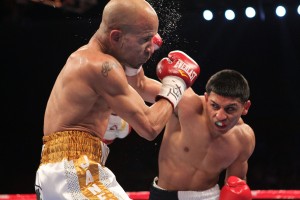 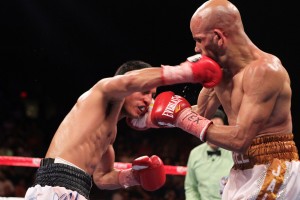 Mares, who recently vacated the IBF bantamweight title, brought considerable power up to 122 pounds and seemed to sacrifice none of his hand speed.  Morel, 10 years Mares’ senior, is a veteran of nine world title fights and a former two-time world champion.  Morel admitted coming into the fight that this could be his last shot at one of boxing’s crowns.  The Puerto Rico native, now living and fighting out of Madison, Wisconsin, came to win, but Mares’ confidence and ability won the night.

Fighting aggressively for every minute of every round, Mares dominated from the early going with a damaging body attack.  He moved fluidly from the body to the head, stunning Morel on several occasions.

What Morel gave up in age, he made up for in heart.  Morel withstood the punishment dolled out by the younger Mares.  He gave a valiant effort right through the final two rounds, making the 11th and 12th the two most exciting and competitive of the bout.

“If this is the last major fight of his career,” said Hall of Fame analyst Al Bernstein during the telecast, “and it very well could be, he has nothing to be ashamed of.”

After the bout, a joyful Mares said the move up in weight was a good one for him.  “I felt a lot stronger at this weight.  I felt complete.

“I have to say Eric was very strong.  I was surprised he withstood the pressure.  He went out like a true champion.  That last round was a great round for both of us.”

The modest champion continued, “I feel I still need to improve.  I am still learning.  Sometimes I make it brawl when I don’t have to, so there’s definitely more I can do.”

When asked if he had been 10 years younger tonight, Morel said, “The (age) doesn’t matter.  He probably would have done the same thing.  He’s a great fighter.  He’s one of the best I’ve ever faced.  I have nothing to be ashamed of.  He put on a great performance.  What else can I say?”

The 26-year old Moreno was coming off of a big win over tough veteran Vic Darchinyan.  On Saturday, he made the 10thsuccessful defense of his WBA Bantamweight Championship.

Moreno used his superior reach and defense to dispatch De La Mora, who retired after the 8th round.  De La Mora went down twice in the fight – in the second and sixth rounds – both times from vicious body punches.

According to SHOStats, over his last five fights, Moreno’s defense has been hit with just 17-percent of his opponents’ punches – second only to Floyd Mayweather.

Moreno improved his record to 33-1-1 adding a 12th knockout.

A 10-year professional at just 26 years-old, Moreno impressed ringside analyst Antonio Tarver and undoubtedly many others.  Tarver said, “This guy could be head and shoulders above the rest in the bantamweight division, but now it’s time to see him against the best.”