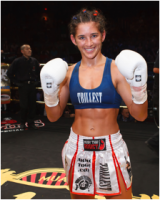 LAS VEGAS, NV  – Scott Kent, CEO of Lion Fight, today announced he has signed Tiffany “Timebomb” Van Soest to an exclusive multi-fight contract, marking the third time the top female featherweight athlete has agreed to fight exclusively for Lion Fight, the premier standup combat sports organization and world’s largest and most active promoter of full Muay Thai rules events.
AXS TV’s nationally televised combat sports news show, INSIDE MMA, was the first to report the news of Van Soest’s exclusive new deal with Lion Fight.
“We are pleased to have Tiffany Van Soest, one of the most exciting and dedicated Muay Thai fighters in the world, signed to our roster of top athletes,” said Kent. “Since making her debut at LION FIGHT 5, Tiffany has established herself as a top fighter in the Lion Fight female featherweight championship division, always delivering incredible performances and taking on the top women in the sport. We are thrilled to call her a Lion Fight athlete and look forward to seeing her back in action again soon.”
Said Van Soest, “Signing with Lion Fight was a no-brainer – it’s the best Muay Thai promotion in the world. I want to thank Scott Kent and Christine Toledo for this opportunity and for giving myself and other Muay Thai fighters such a great place to call home.”
“Time Bomb” delivered another stunning KO for fight fans in attendance at LION FIGHT 16 July 4 live from the Pearl at Palms Casino Resort. In the co-main event, Van Soest squared off with Sindy Huyer, battling the Italian Muay Thai Champion for five rounds before finishing her with a perfectly timed front kick 56 seconds from the final bell. The win advances her record to 9-1, and puts her in contention for a title fight with current Lion Fight Featherweight Champion Caley Reece.
Van Soest was one of the first Muay Thai athletes ever to be signed to a contract with Lion Fight, and was the first signed female in the organization’s history. Lion Fight continues to sign top-ranked world class Muay Thai fighters to the organization, and is making those announcements as they become official.
Kent stated he is working on the championship rematch Van Soest vs. Reece 2, and is looking at dates in late 2014 and early 2015.
For more Lion Fight news, information and event updates, please visit  LIONFIGHT.com  orFacebook.com/LIONFIGHT  and Follow on Twitter @LIONFIGHT.
About Lion Fight Promotions
Based in Las Vegas, Nevada, Lion Fight Promotions, LLC is the world’s premier Muay Thai organization. Founded in 2010 by owner and Chief Executive Officer Scott Kent, Lion Fight is the most active promoter of Muay Thai events and stands as the largest standup combat sports organization in North America. Sponsored by Singha Beer, the exclusive and official beer of Lion Fight, its full rules Muay Thai events are televised live nationally to over 43 million homes as part of AXS TV’s long-running Friday Night Fights series. The first-ever professional combat sports organization to be included on the UFC International Fight Week schedule of events, Lion Fight is dedicated to growing Muay Thai in America and to presenting world-class events stacked with the best fighters in the sport.
About Muay Thai
Muay Thai is a combat sport from the Muay martial arts of Thailand that uses stand-up striking along with various clinching techniques. This physical and mental discipline, which includes combat on foot, is known as “the art of eight limbs” because it is characterized by the combined use of fists, elbows, knees, shins and feet. Muay Thai became widespread internationally in the twentieth century, when Muay Thai practitioners defeated notable practitioners of other martial arts. The professional sport of Muay Thai is governed by the World Muay Thai Council.
About AXS TV Fights
AXS TV Fights presents more LIVE mixed martial arts and Muay Thai events than any other television network with 40+ LIVE world-class fight cards each year. Michael “The Voice” Schiavello and UFC hall of famer Pat Miletich call all the action as champions, challengers, and top prospects take center stage every Friday night at 10pE/7pP. AXS TV Fights can be found online, on Facebook and on Twitter. AXS TV is widely distributed in the U.S. via AT&T U-verse, Charter, Comcast/Xfinity, DIRECTV, DISH, Suddenlink, Verizon FiOS, and other cable, satellite and telco providers. The network is also carried in Canada and the Caribbean.
Be Sociable, Share!