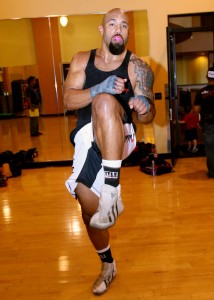 STRIKEFORCE Challengers This Friday, Oct. 22, at Save Mart Center in Fresno

FRESNO, Calif. (Oct. 20, 2010) – Four of the fighters who will appear on a top-notch STRIKEFORCE Challengers event presented by Rockstar Energy Drink at Save Mart Center in Fresno, Calif., live on SHOWTIME® at 11 p.m. ET/PT (delayed on the West Coast), this Friday, Oct. 22, participated in an Open Media Workout on Wednesday at Fort Washington Fitness.

In this Friday’s main event, welterweight Relentless” Roger Bowling (8-0) will put his unbeaten record on the line one more time against “Vicious” Bobby Voelker (22-8) of Kansas City, Kan., in a rematch of an exciting fight last May 21 that ended prematurely due to an accidental poke in the eye.

Tickets for the STRIKEFORCE Challengers event are on sale at the Save Mart Center box office, select Save Mart Supermarkets, all Ticketmaster locations (800) 745-3000, Ticketmaster online (www.ticketmaster.com) and STRIKEFORCE’s official website (www.strikeforce.com).

Wow, this was a really quality post. In theory I’d like to write like this too – taking time and actual effort to make a good post… but what can I say… I procrastinate alot and never appear to get something done.