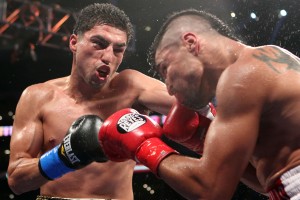 LOS ANGELES (June 24, 2012) – A stunning upset capped a night of action packed fights on Saturday’s SHOWTIME CHAMPIONHIP BOXING telecast from STAPLES Center in Los Angeles.  Josesito Lopez, a hungry and dangerous 140-pound contender, came up in weight and stopped “Vicious” Victor Ortiz via ninth-round technical knockout in a thrilling bout that will be a contender for Upset of the Year.

“I told everyone that I was going to shock the world,” said Lopez, who captured the WBC Silver Welterweight belt. 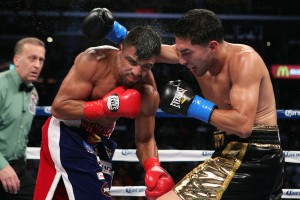 In the opening bout of the show, Argentine slugger Lucas Matthysse notched his 29th knockout in 31 wins by overpowering Humberto Soto (TKO5) in super lightweight fight.

Lopez sealed the win by breaking Ortiz’s jaw which Ortiz said happened in the fifth round.  After the bell, Ortiz told his corner he couldn’t continue.

“Yeah, Josesito broke my jaw,” Ortiz slurred immediately after the fight to SHOWTIME reporter Jim Gray.  “I couldn’t close my mouth and it was very painful every time he touched me.”  Ortiz was taken to the hospital shortly after the fight.

During the action, Hall of Fame analyst Al Bernstein said, “Lopez didn’t come here to be an opponent or to survive.  Lopez is making this a scintillating fight.”

Lopez said, “I knew I had to fight the fight of my life to win.  I hurt him with a few punches in every round. He hits hard, man, but there was no way I was going to quit.  I am the Mexican Paul Williams.”

In the co-feature, Matthysse improved his impressive record to 31-2 with 29 knockouts.  In a bout that featured pure action in every minute of all five rounds, Matthysse had the edge in power.  Soto, a former three division world champion, was knocking on the door of another world title fight, but Matthysse had other plans.

Soto went down for the first time in his career in the final seconds of the fifth round from a series of heavy blows.  He beat the count, but back in his corner he and his team advised the referee to halt the action. 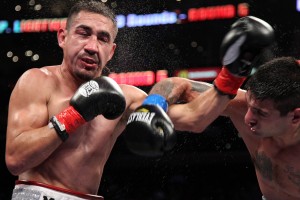 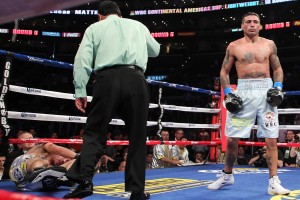