JONATHAN ROMERO REMAINS UNDEFEATED WITH IMPRESSIVE 12-ROUND DECISION OVER EFRAIN ESQUIVIAS IN MAIN EVENT ON SHOBOX: THE NEW GENERATION 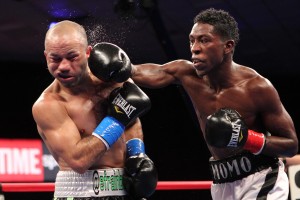 Replay Of Doubleheader Is Tuesday, Sept. 25,

Romero, in command from the outset, was victorious in an elimination fight for the No. 2 ranking in the IBF by the scores of 120-107 and 119-108 twice. There were no knockdowns. Romero entered the ring ranked fifth in the IBF and WBO and ninth in the WBA. 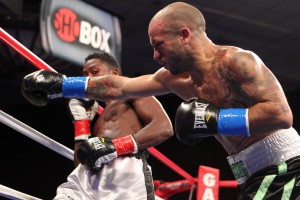 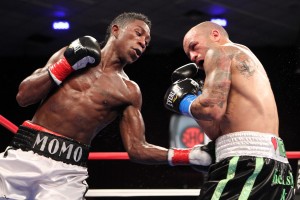 “Tonight we saw two good wins by fighters at different stages in their careers in the same weight class,’’ ShoBox expert analyst Steve Farhoodsaid afterward. “One was world-class, the other was a world class prospect.’’

Farhood liked what he saw in the 5-foot-9, 25-year-old Romero, who was making his third start in a row in the United States, and fourth overall. 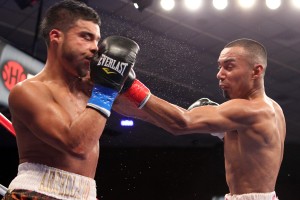 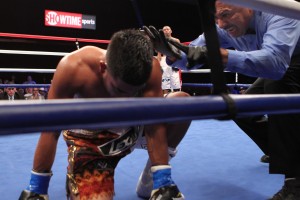 “Romero was impressive in several ways,’’ Farhood said. “It was predictable that he’d be effective when he was on the move but for large portions of the fight he also fought Esquivias at his own game on the inside. To me the most important thing of all was Romero’s energy level from round one to round 12.’’

Morales won the toughest fight of his career to date. What surprised Farhood was the way he accomplished it.

“Morales was fighting a style a bit different than I expected,’’ Farhood said. “Once he hurt Arellano, he turned boxer, used the ring and picked his spots very effectively. He also got off the floor for the first time in his career and showed the ability to overcome adversity, something all prospects eventually have to do.’’

Romero was pleased with his performance and is hopeful a world title shot is forthcoming.

“I felt very good every single round,’’ he said. “I prepared hard for this fight. I sparred with guys that came forward all the time. I knew what he was coming to do because I’d seen him fight. I’m ready to become world champion. But to be a world champion I have to go through great fighters like Esquivias to get to my goal.’’

The aggressive-minded, five-foot-four Esquivias spotted the winner five inches in height, but he never stopped pressing the issue.  Esquivias even started quickly, which isn’t the norm for him. But it did no good against the classy Romero.

“He fought his fight and he fought well,’’ said Esquivias, who was docked a point after the seventh for a blatant late hit. “He didn’t want to brawl, but he fought smart. He boxed and I couldn’t catch him. There’s really not much I could have done differently. I was little tired toward the end; it was my first 12-rounder. But I was still throwing punches at the finish. He gave me problems with his movement. I wanted to make it an exciting fight for the crowd. Too bad he didn’t want to stand and trade more.”

The 23-year-old Morales, making his fifth start this year and seventh at Chumash, was satisfied with his performance despite getting knocked down.

So what was it like getting floored for the first time in his career? “It was a new experience, something I never had felt before,’’ Morales said. “It’s part of boxing, but I said to myself that I have to keep coming forward and show some heart and respect for the game. It was a good fight and he’s a good boxer.”

Arellano felt the scoring was a tad out of line. “I feel that it was a little high in his favor,’’ he said. “I feel I won more rounds than they gave me. It was a good fight though. I don’t take anything away from the kid. I thought I had him out when I dropped him. I was ready to jump on him but for some reason the ref kept me from going right after him and gave him more time. Then he hung in and made it through the round.’’

The doubleheader will re-air the first time this week as follows:

Friday’s fights will be available ON DEMAND beginning today/Saturday, Sept. 22.