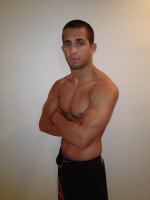 The red-hot Smith has won 10 consecutive bouts – 7 by way of submission – since suffering a lone defeat in his professional debut on Aug. 21, 2009.  In his last start on July 14, 2012, Smith earned a unanimous decision over D’Juan Owens.

Born in Sarasota, Fla., Smith is a lifelong athlete who competed in both wrestling and football before turning down several offers from NCAA Division II schools that would allow him to continue his football career.

In 2007, Smith turned shifted his focus exclusively to MMA with dreams of becoming a champion.  After amassing a 5-1 record under amateur status, he turned pro and hasn’t look back since.

Smith’s opponent, Sanders, will put a nine-fight win streak on the line.  The 33-year-old has finished his last three opponents – two by way of submission and the third via TKO.

Tickets for the star-studded, 10-bout World Series of Fighting event, priced from $29 (plus applicable service fees), are on sale at the Hard Rock Hotel Box Office, all Ticketmaster locations, online atTicketmaster.com and charge-by-phone at 800.745.3000.

In the welterweight (170 pounds) main event and a long-awaited rematch, Jon Fitch (24-5) of Fort Wayne, Ind., will square off with fellow superstar Josh “The People’s Warrior” Burkman (25-9) of Salt Lake City, Utah.

The second meeting between the 35-year-old Fitch, a member of San Jose, Calif.-based Team AKA, and the 32-year-old Burkman, a winner of four consecutive fights, comes slightly more than seven years after Fitch submitted Burkman with a rear-naked choke in the second round (4:57) of their initial encounter that, coincidentally, also took place at Hard Rock Hotel & Casino in Las Vegas.

In the co-main event, streaking stars and fearsome submission aces Tyson “Man of” Steele (10-1) of Saskatoon, Saskatchewan Canada and Steve Carl (19-3) of Cedar Rapids, Iowa will face off at welterweight.

Also slated for battle on the main card is heavyweight rising star and Brazilian Jiu-Jitsu black belt Rolles Gracie (8-1) of Rio De Janeiro, Brazil, who will face off with hard-hitting KO artist Dave Huckaba (20-5) of Sacramento, Calif.  All 8 of Gracie’s career victories have come by way of submission and 16 of Huckaba’s 20 career wins have come by way of (T)KO.

Undefeated prospect Justin Gaethje (8-0) of Denver, Colo. will collide with Brian Cobb (20-7) of Bakersfield, Calif., in a lightweight (155 pounds) contest and the first televised main card bout of the night.

In preliminary card action, battle-tested submission specialist John Gunderson (34-14) of Houston, Tex. will be pitted against Dan “The Upgrade” Lauzon (16-4) of Bridgewater, Mass. in another lightweight tilt.  All 16 of Lauzon’s professional career victories have come by way of (T)KO or submission.

Fellow undefeated prospects Krasimir Mladenov (9-0) of Borica, Bulgaria and Kendrick Miree (5-0) of Atlanta, Ga., will square off at middleweight (185 pounds).

Doors at The Joint at Hard Rock Hotel & Casino will open at 4:30 p.m. PT and the first preliminary card bout will begin at 5:30 p.m.

ABOUT WORLD SERIES OF FIGHTING
Based in Las Vegas, Nev., the fight capital of the world, World Series of Fighting is a professional Mixed Martial Arts (MMA) fight promotion dedicated to delivering an incredible, action-packed entertainment experience for fight fans by producing the best possible matchups between elite fighters from around the globe. For more information please visit www.WSOF.com. Follow World Series of Fighting on Twitter@MMAWorldSeries and World Series of Fighting President Ray Sefo @SugarRaySefo.