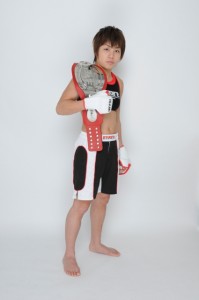 As part of the new alliance, JEWELS champion Akaya Hamasaki (7-0) of Yamaguchi, Japan will head to Kansas City, Kan. to square off with fellow undefeated star Jasminka “Impressive” Cive (5-0) of Graz, Styria Austria in a flyweight (115 pounds) matchup at Invicta FC 2: McMann vs. Baszler at Memorial Hall on Sat., July 28.

Hamasaki is one of two fighters from the JEWELS roster who will do battle on the Invicta card.  The other, Hitomi “Girlfight Monster” Akano (18-9) of Tokyo, will square off with Japanese Jiu-Jitsu black belt and Cesar Gracie-protégé Alexis Davis (11-5) of Colborne, Ontario Canada at bantamweight (135 pounds) in the co-main event.

“We are excited to enter this partnership with JEWELS, which was essentially founded with the same goal of placing professional women’s MMA competition, at its highest level, on a major stage,” said Invicta President Shannon Knapp.  “This relationship with an overseas promotion will effectively make it more turnkey for us to bring in some of the best women fighters in the world to compete in the Invicta cage and to send our top athletes to Japan to compete at JEWELS events.

The 30-year-old Hamasaki, a second-degree Judo black belt, has been tearing through the ranks of competitors in Japan since she made her professional debut on Oct. 25, 2009, submitting Kinuka Sasaki with an armber in the second round of their matchup.

On Dec. 17, 2010, Hamasaki emerged the winner of a four-woman, single-elimination tournament, earning a unanimous decisions over Sakura Nomura and Seo Hee Ham, respectively.  Hamasaki is coming off a first-round submission (kimura) win over Yuka Tsuji at a JEWELS event.

Also 30 years of age, Cive has yet to be taken the distance of a professional fight, winning four of her five career starts by way of KO or TKO and one of her bouts by submission.  She has made a name for herself outside of MMA, winning championships in Muay Thai and K-1 rules kickboxing competition.

In her last effort on March 17, Cive scored a third round TKO with a barrage of punches on Eva Henesova in Vaduz, Liechtenstein.

In other main card action, U.S. Marine and rising bantamweight star Liz “Girl-rilla” Carmouche (6-2) of San Diego, Calif. will square off with St. Louis Park, Minnesota’s Kaitlin Young (7-5-1), who earned “Fight of the Night” honors at the inaugural Invicta event on April 28.

The Invicta event will kick off with a five-bout preliminary card.  In a bantamweight matchup between two undefeated future stars, Sarah Moras (2-0) of Kelowna, British Columbia Canada will face Raquel Pennington (1-0) of Colorado Springs, Colo.

After compiling a 5-2 record under amateur status, 25-year-old Jessamyn “The Gun” Duke (0-0) will make her much-anticipated professional debut against unbeaten 30-year-old Suzie Montero (1-0) of Pompano Beach, Fla. at bantamweight.

In an atomweight (105 pounds) matchup, Angelica Chavez (4-1) of Albuquerque, N.M. will face an opponent to be determined after Kikuyo Ishikawa (7-3) of Gushikawa, Okinawa Japan, withdrew from the bout.

All bouts have been approved by the Kansas State Athletic Commission.

Invicta Fighting Championships is a world championship Mixed Martial Arts (MMA) fight series dedicated to providing female athletes with a major platform to hone their skills on a consistent basis.  Founded in 2012 by longtime MMA executive Shannon Knapp and sports aficionado Janet Martin, Invicta is committed to pioneering the future growth of women’s MMA by promoting the best possible matchups between female competitors and identifying and developing future superstars of the sport.

Founded in 2008 as the successor of Smack Girl.(An event promotion company called Marvelous Japan, Inc purchased all of the rights of Smack Girl, formed partnership with DEEP, then re-started as JEWELS)  The headquarters is located in Tokyo, Japan.  JEWELS is the only all women’s MMA promotion in Japan now and since its foundation on 2008 JEWELS has successfully promoted 19 professional MMA shows, and also, several grappling and amateur events as well.