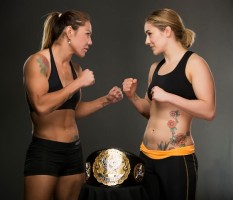 Cyborg_vs_Coenen:  Pound-for-pound great and brutal KO artist Cris Cyborg (left) will square off with fellow superstar and submission expert Marloes Coenen (right) in a highly-anticipated rematch and the main event of the next Invicta Fighting Championships women’s world championship Mixed Martial Arts (MMA) event at Ameristar Casino Hotel Kansas City on Saturday, July 13.  Tickets for the event are on sale.

FOR INVICTA FC 6: CYBORG VS. COENEN 2

In the main event of the stacked 13-bout card, ferocious KO artist and pound-for-pound sensation Cris Cyborg (11-1, 1 NC) of Curitiba, Brazil will face off with fellow superstar and submission ace Marloes Coenen (21-5) of The Netherlands in the first-ever Invicta FC world featherweight (145 pounds) championship bout.

The showdown between rivals Cyborg and Coenen marks a highly-anticipated rematch to their explosive, barnburner first fight in Sunrise, Fla. on Jan 30, 2010 in which Cyborg emerged victorious by way of TKO (punches) in the third and final scheduled round (3:40) of action.

The 25-year-old Esparza, a winner of four consecutive bouts, became the first strawweight champion in Invicta FC history by stopping Lynn Alvarez with a barrage of punches in the first round (2:53) of their matchup in Kansas City, Kan. on Oct. 6, 2012.  Esparza, who has claimed six of her nine professional career victories by way of (T)KO or submission, is unbeaten in her three Invicta FC starts to date.

Hamasaki, a 31-year-old submission specialist, has been an unsolvable puzzle in action, thus far.  After reeling off victories in her first seven stars in Japan, she made her debut in the U.S. at Invicta FC 2 lastJuly 28, submitting Lacey Schuckman in the third round (4:45) of action with an armbar.  Hamasaki recorded her latest conquest in on Dec. 15, a unanimous decision over Emi Fujino in a JEWELS-promoted contest in Japan.

After her second Invicta FC “Fight of the Night” performance, prolific striker Leslie “The Peacemaker” Smith (5-3-1) of Pleasant Hill, Calif. will drop from bantamweight to flyweight and face off with Jennifer Maia (7-2) of Curitiba, Parana Brazil.  Maia is coming off her second consecutive win, a unanimous decision over superstar Zoila Frausto Gurgel, at Invicta FC 5 on April 5.

Former Invicta FC world atomweight (105 pounds) champion Jessica Penne (10-2) of Huntington Beach, Calif. will look to rebound from her hard-fought defeat at the hands of Michelle Waterson in the main event of Invicta FC 5 when she squares off with battle-tested road warrior Nicdali “The Night Queen” Riveral-Calanoc (8-6) of Tulsa, Okla.

Undefeated, fast-rising stars Joanne Calderwood (6-0) of Glasgow, Scotland and Claudia Gadelha (9-0) of Mossoro, Rio Grande Do Norte Brazil will put their perfect records on the line against each other in a flyweight (125 pounds) bout.

Crowd-pleasing finisher “Rowdy” Bec Hyatt (5-2) of Brisbane, Queensland Australia will look to notch her second straight victory under the Invicta FC banner in a strawweight showdown with JEWELS starMizuki Inoue (5-1) of Nagoya, Aichi Japan.  Inoue has won all five her professional stars to date by way of submission inside of two rounds of action.

A four-bout preliminary card will be highlighted by a strawweight collision between unbeaten upstartsRose Namajunas (2-0) of St. Paul, Minn. and Tecia “The Tiny Tornado” Torres (2-0) of Fort Lauderdale, Fla.  Namajunas captured the attention of the entire MMA fight world when she scored a stunning, 12-second submission on Kathina Catron at Invicta FC 5.

Power striker Veronica “The Heartbreaker” Rothenhausler (1-0) of Sacramento, Calif. will collide with Mollie Estes (1-2) of Oceola, Miss. in a featherweight scrap.

Invicta Fighting Championships (www.invictafc.com) is a world championship Mixed Martial Arts (MMA) fight series dedicated to providing female athletes with a major platform to hone their skills on a consistent basis.  Founded in 2012 by longtime MMA executive Shannon Knapp and sports aficionado Janet Martin, Invicta is committed to pioneering the future growth of women’s MMA by promoting the best possible matchups between female competitors and identifying and developing future superstars of the sport.