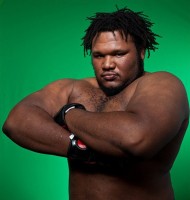 The fight card will be headlined by a much-anticipated heavyweight matchup between all-time great Mirko “Cro Cop” Filipovic (28-11-2) of Zagreb, Croatia and Olympic Judo medalist Satoshi Ishii (12-2-1) of Osaka, Japan.

“I’m super excited for this opportunity to take my career to the next level,” said the 28-year-old, 5-foot-9 Barnett, who has begun to make a name for himself with his crushing KO power as well as his theatrical post-fight victory celebrations that include break dancing and back flips, remarkable moves for someone who tips the scales at 265 pounds.

“I’ve got a new nickname, continued the stocky Barnett, “a new management team, some new tricks for my opponents and a whole new outlook on my future, and I can’t wait to show Mr. Inoki and the Japanese fans what Huggy Bear is all about.”

Barnett notched his ninth professional victory on May 9, decimating Richard White with a flurry of strikes that sent White to the canvas in the first round (4:57) of their matchup in Pensacola, Fla.  To date, seven of Barnett’s wins have come by way of (T)KO, four of which have aired live on AXS TV.

Barnett began his martial arts training with Tae Kwon Do at the young age of four, eventually adding wrestling and Capoeira to his repertoire.  A lifelong athlete, he played football for NCAA Division I University of South Florida after earning a wrestling scholarship to junior college.

Born in Spain, Barnett relocated with his family to various parts of Europe over time before they settled in the U.S.