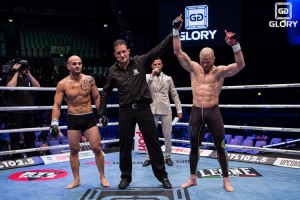 001 – Cesario Di Domenico (right) with his hands raised after finishing David Dolce (left) with a body triangle in the first round of  their MMA rules bout on the GLORY 3 Rome ‘Final 8′ preliminary card.

There were three finishes out of the four fights and all eight combatants had clearly set out to go to war. The result was an enormously entertaining undercard that lit the crowd up and heightened their anticipation for the main card, which features the FINAL 8 tournament of the GLORY Lightweight Grand Prix which commenced in Stockholm, Sweden earlier this year.

“Italy is the home of the gladiators and we hoped for epic battles from these four matches, but they exceeded even our wildest expectations. There were some standout performances from several fighters and you will certainly see some of these names on future GLORY cards,” commented GLORY Managing Director Marcus Luer after the conclusion of the undercard.

Cesario Di Domenico headlined the preliminary portion of the GLORY 3 card in a three-round MMA fight with fellow Italian fighter David Dolce at lightweight (70 kilograms / 155lbs). Di Domenico is based in Holland and is part of the Golden glory team. Di Domenico is a Golden Glory fighter and trains under Martijn De Jong, who counted Alistair Overeem and Siyar Bahadurzada among his protégés before their move to America.

A former Shooto fighter, De Jong has solid grappling credentials and he has obviously passed these on to Di Domenico. After a furious exchange of punches at the start, Di Domenico backed off to taunt his opponent with his hands down, moving his head around and daring him to try and hit him. When Dolce came in to do so, Di Cesario hit a nice ankle pick and then moved to a back-take as Dolce tried to get up from the floor.

A body-triangle quickly followed, plus an arm around the neck. Dolce was having the breath squeezed out of him by body and neck and it proved impossible for him to endure any longer. He tapped at 1:08 of the first round to give Di Cesario a win by rear-naked choke and take his record to 3-2 overall.

What Lecca lacks in finessee he makes up for in power. His right hand is extremely dangerous and he let D’Amuri feel it early, catching a front kick and firing back with an overhand right to the jaw. The Team Invictus fighter’s gameplan seemed to center around catching or blocking D’Amuri’s kick then unleashing this counter with the big right hand. And while Lecca’s defense was a little loose (he was taking some shots himself in the brawl) his chin is also very strong and he took D’Amuri’s shots without hesitating.

When the end came, it was devastating. One massive overhand staggered D’Amuri for a seven-count. When the action restarted, a second overhand had him wobbling into the referee’s arms and taking an eight-count. D’Amuri soldiered on and tried keeping a really tight double-arm cover on the third restart but Lecca just smashed through it like it wasn’t there.

D’Amri fell forward and only the ropes saved him from landing flat on his face. Instead he hung there while Lecca set about him and the referee had to physically dive in to end the fight and declare Lecca the winner by KO. Lecca roared in triumph and the arena, obviously full of his fans, roared back at him.

Shorter and lighter, Imeri was nonetheless the aggressor in the first round, getting the action underway with heavy combinations from the start. A southpaw, he was scoring well with a lead right hook/left body-hook combination and forcing Raini to keep a tight cover. Raini scored some good counters as the round went on though, including several heavy right legs to Imeri’s midriff.

Raini came out aggressive in round two and started using his long legs to cause problems for Imeri, hacking away at his legs every time the shorter man threw his hands. But Imeri’s lead hook was still causing him problems and his superior boxing in general was becoming too much for Raini to handle. A ferocious flurry near the end of the second nearly had Raini down and he was under seriously heavy pressure as the bell went.

Imeri went into all-out attack mode for the final frame, trying to put Raini away for a spectacular finish. What followed was a round of thrilling action as the game Raini gave everything he had. He knew he had to get a finish, being two rounds down on the scorecard, and the battle was furious. Imeri’s head movement, angles and footwork were too much for Raini though and apart from some brief rallies and the odd hard kick, Imeri was clearly in control.

In the opening bout of the event, Golden Glory fighter Musardo scored early with an early body lock takedown before taking a solid top position inside Be and GnP. Belsanti close to an armbar but had to give it up because of getting hit and thus allowed the guard pass.

Musardo took a heavy side mount and then progressed to taking Belsanti’s back when the Italian tried to roll out to his knees. Musardo put his hooks in, flattened Belsanti out and sank on an RNC to force the tap at the 3:00 mark.

Fans without access to a live television broadcast can watch the main card on a live, high-definition stream available via GloryWorldSeries.com at 20:30 CET/3:30 p.m. EST/12:30 a.m. PST. The HD stream is priced at $15.00 US / €11.60 – visit to GloryWorldSeries.com for more details.

GLORY World Series (www.gloryworldseries.com) is the world’s premier stand-up fighting league, staging events across the globe. It offers up to $1,000,000 in prize money to successful fighters via individual matches and participation in the 16- and 8-man tournaments, which are open to only the very best fighters in each weight class.

With television deals across over 145 countries plus a ground-breaking online video streaming system and the world’s largest online martial arts library, GLORY is one of the world’s most widely-broadcast sporting organizations already.

Owned and operated by Glory Sports International (GSI), the organization has offices in Holland, the UK, Thailand, Malaysia and Singapore. Its personnel include prominent hedge-fund investors, the pioneering sports marketing agency Total Sport Asia and several executives from the Golden Glory and It’s Showtime team.