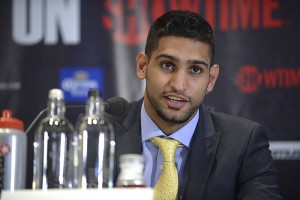 In the Main Event of the Battle For Brooklyn

From Barclays Center in Brooklyn, N.Y.

Having fought and defeated both Malignaggi and Judah (in 2010 and ’11 respectfully), Khan’s experience in the fight game and intimate knowledge of the main event will be on tap as he joins SHOWTIME CHAMPIONSHIP BOXING host Brian Kenny, play-by play announcer Mauro Ranallo, Hall of Fame analystAl Bernstein and EMMY® Award winning sports reporter Jim Gray.

“I’m really looking forward to working with SHOWTIME on another top draw bill,” said Khan. “The main event between Paulie and Zab will be a Brooklyn blockbuster with two of boxing’s most skilled fighters. Having shared the ring with both men I know together they will bring speed, power, ring craft and heart to the table. Fighting in their own backyard, neither one of them will want to leave that ring the loser so it makes for an extremely intriguing matchup between two truly world class operators. The undercard is filled with some similarly great clashes, which could headline on their own. IBF world champion Devon Alexander versus Shawn Porter, Sakio Bika defending his WBC world title against the undefeated Anthony Dirrell and Austin Trout up against Erislandy Lara.  These are the type of fights that can turn into edge-of-the-seat thrillers.”

A former Unified Super Lightweight World Champion, Khan is lightning-fast and athletically gifted inside the ring.

In 2004, Khan became the youngest British Olympic boxing medalist when he won silver at the Athens Olympics at the age of 17.  As a professional, Khan (28-3, 19 KO’s) has faced many of the best fighters of this era including current and past champions Danny Garcia, Zab Judah, Marcos Maidana, Paulie Malignaggi and Marco Antonio Barrera. He won two consecutive fights in the last 12 months, including a hard-fought unanimous decision over world champion Julio Diaz on April 27. A give-and-take boxer-brawler, Khan is a fan favorite wherever he goes.  The charismatic young man turns 27 on Dec. 8.

ABOUT “JUDAH VS. MALIGNAGGI”:

Judah vs. Malignaggi is a 12-round fight for the NABF and NABO Welterweight titles taking place on Saturday, Dec. 7, 2013 at Barclays Center in Brooklyn, New York.  The event is promoted by Golden Boy Promotions in association with Super Judah Promotions and sponsored by Corona, AT&T, Grudge Match and Casamigos Tequila. In the co-featured bout, Devon Alexander puts his IBF welterweight title on the line in a 12-round bout against Shawn Porter,  Erislandy Lara defends his interim WBA Super Welterweight title in a 12-round fight against Austin Trout and Sakio Bika defends his WBC Super Middleweight title against Anthony Dirrell in a 12-round bout.  The SHOWTIME telecast begins at 8:00 p.m. ET/ 5:00 p.m. PT immediately following ALL ACCESS: Broner vs. Maidana which begins at 7:30 p.m. ET/ 4:30 p.m. PT. The telecast will be available in Spanish via secondary audio programming (SAP).