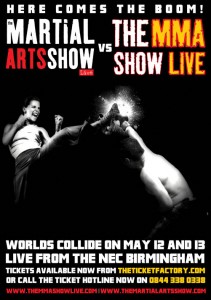 ALL JOIN THE SHOW!

Birmingham, UK – February 10, 2012 – It was confirmed today that fourteen additional fighters have been added to The MMA Show Live line-up. The event is being held May 12 -13 at The NEC in Birmingham, England.

The MMA Show Live will be an interactive fan experience dedicated to mixed martial arts from around the World. It will populate a second hall at the NEC in Birmingham, alongside The Martial Arts Show Live.

Training sessions with fighters are available for Platinum ticket holders only and are limited to 500 people across the entire weekend. For a limited time only, Platinum tickets are priced at £90 instead of £100.

Platinum tickets include 1 training session per day, VIP access to both The Martial Arts Show Live and The MMA Show Live throughout the weekend, exclusive access to the Platinum Room in the MMA hall where fans can sit down and talk with the A-list fighters & celebrities, entrance to the VIP party held on the Saturday evening in Birmingham City Centre, a souvenir event program, access to the fast-track line at the autograph zone and premium platinum seating at the Q&A stage.

Another 20+ fighters and personalities are expected to be confirmed in the coming weeks.

Strictly limited reduced price “Early Bird Tickets” are available now at www.theticketfactory.com or from the 24 hour ticket hotline at 0844 338 0338. Fans are encouraged to book early, as ticket prices will increase on March 5, 2012.

MA Inc is the company behind many of the industries key developments within the World of Martial Arts in the UK. Created to grow the various sectors of business that make up the Martial Arts Market place, MA Inc is committed to creating, supporting and developing a new era of professional appreciation.

About The Martial Arts Show Live

The Martial Arts Show ‘Live’ was born from the need for the UK to have a central event for the UK’s finest martial arts athletes to showcase their talent. From its inception, TMAS ‘live’ was a winning format, bringing together the classical and traditional arts from around the globe in order to share the vast array of talent and accumulated knowledge & expertise.
TMAS ‘live’ is the brain child of Midlands based entrepreneurs, Paul Clifton, Kwoklyn Wan who have spent the majority of their lives involved in the promotion of Martial Arts around the World.

TMAS ‘Live’ is staged at the centre of the United Kingdom, at the National Exhibition Centre, in Birmingham and provides the perfect setting, together with excellent transport/travel facilities. Whether it be by road, rail or air, all can access the NEC via its dedicated and direct motorway link roads or its adjacent airport and railway terminal, which means that you can arrive, enjoy the event and depart with minimum fuss or on site travel.