Finishes rule the night in Ontario 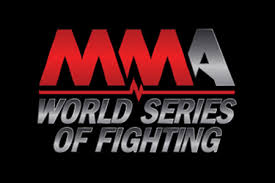 Saturday night in Ontario, Calif. World Series of Fighting held the fourth event in the promotion’s young history. Solid preliminary bouts led the way for the five-fight main card headlined by a light-heavyweight bout between Tyrone Spong and Angel DeAnda.

The main card, which was on NBC Sports Network, kicked off with a lightweight bout between two veterans of mixed martial arts. Tyson Griffin took on Gesias Cavalcante, which many expected to be full of mat work. However, the two lightweights had different plans.

Both fighters exchanged blows early and often, but it was Griffin that took the opening round with a late takedown. Cavalcante fought back and took a close second round, which left the decision hanging in the balance as the final round began. Cavalcante wasted no time as he shot for a takedown. He managed his way to Griffin’s back and began landing solid shots. After a warning by the referee, Griffin began looking for an escape but there was no way out as Cavalcante had his legs wrapped around Griffin’s waist. The ref had no choice, but to end the match. The stoppage drew boos, but it was well-earned and hard fought victory for Cavalcante.

Next up was a battle between heavyweights. Dave Huckaba made his WSOF debut against WSOF President Ray Sefo, who was also making his debut for his own promotion. Yes, you read that correctly…Ray Sefo is the president of World Series of Fighting.

It was a slow paced first round with both fighters landing some shots, but Sefo landed more often and much harder. Second round started with a spinning back kick from Sefo. About a minute into the round, both fighters exchanged solid shots with Huckaba being on the receiving ends of the harder blows.

With 45 seconds remaining in the second round, Sefo was caught with his hands low and Huckaba took advantage. Huckaba landed a shot that sent Sefo reeling into the cage and then he went for the finish. Huckaba began unloading before the referee stepped in to stop the fight.

If there were any doubt that Sefo was the least bit bitter, these were his words postfight “Keep an eye out for Huckaba. I’m going to keep him busy”.

Third bout of the night was between Nick Newell and Keon Caldwell in lightweight action. Newell, who was born a congenital amputee, took a perfect 9-0 record into the bout against a 9-1 Caldwell.

Combined these fighters have only gone the distance once in their careers. And, this fight would not even go past the first round.

Newell utilized superb wrestling and takedown offense to get Caldwell on the ground. After a takedown, Newell maneuvered into a guillotine and made Caldwell tap before the end of the opening round. The victory pushed Newell to 10-0 and continued a story of a fighter with a bright future.

With two bouts to go, the final four fighters would be following two impressive finishes. Next up was a bantamweight bout between Marlon Moraes and Brandon Hempleman.

Moraes came out on the attack early and often as he opened a vicious cut on Hempleman. The Brazilian did early damage to his opponent and kept pouring it on throughout the first round. It was a slow start to the second stanza, but Moraes quickly picked up his pace and took over the round.

The Brazilian, Moraes, showed his dominance in the second round and it showed to the judges who all gave him a 10-8 round. In the final round Moraes seemed to coast after already having the bout in hand, but it was later revealed that he might have suffered a broken foot in the second round. As dominant as Moraes was, it should be noted how tough Hempleman is and that he was not finished even after being dominated in the first two rounds.

The night’s main event pitted the return of Tyrone Spong again Angel DeAnda, who was looking for an upset victory over the much-hyped Spong.

DeAnda showed no fear in the opening round. He was more than willing to trade strikes with the kickboxing world champion. At moments, DeAnda even pushed the tempo. Spong did make him pay though with some solid leg kicks and a few strikes. Spong took an early advantage after the first of three rounds.

It was more of the same from Spong in the second round. He continued to land hard kicks to DeAnda’s left leg and picked his spots wisely. But, he could not put his opponent away. Nearing the end of the round DeAnda started to find openings and landed some combinations on Spong. It was just enough that some questioned whether or not DeAnda won the middle frame.

The third round was a mirror image of the first two. Spong continued to land low kicks, but would not test DeAnda’s kick defense. DeAnda seemed to fade as the bout went on while Spong looked content with coasting. However nothing should be taken away from DeAnda’s toughness and ability to withstand the amount of punishment that he did.

In just his second professional MMA bout, Spong showed that he has a lot of room for growth. Even after his unanimous decision victory, Spong looked a diamond waiting to be shined.