It’s a rare occurrence when the Ultimate Fighting Championship takes to the octagon on a night other then a Saturday, but that was the case this Wednesday evening. The UFC was in Indianapolis for Ultimate Fight Night 27, which was headlined by a rematch between Martin Kampmann and Carlos Condit.

The night began with a middleweight bout Brad Tavares and Bubba McDaniel. Tavares came in as the biggest favorite on the card and was expected to defeat McDaniel with an overpowering standup game. McDaniel, coming off of a victory in his official UFC debut, was thought to have the better ground game but it was never truly utilized.

Tavares controlled the first two rounds with an array of leg kicks and combinations, which was more than enough to give him the 20-18 advantage heading into the final round. McDaniel finally utilized his grappling skills in the final round, but was not able to lock in a finish and ultimately lost the bout via unanimous decision. Tavares extends his win streak to four fights.

From middleweights to bantamweights, Takeya Mizugaki took on Erik Perez in a battle of highly touted 135ers. Mizugaki came into the night winning his previous two fights while Perez was 3-0 in the UFC all coming by way of finishes. His fourth trip into the octagon would not end so quickly. Mizugaki was able to end the opening round seemingly in control of the bout. And, he began the middle round in similar fashion. Mizugaki landed the more solid shots and stuffed nearly every takedown attempt by Perez.

With the fight heading into the final round, it was a pretty even fight and an exciting third round was expected. And, it was delivered. Both men threw solid shots and Mizugaki almost came away with a submission win, but Perez somehow managed to escape. The bout wound up going to the judges who gave a split decision victory to Takeya Mizugaki.

Up next was a battle between two former TUF winners. Robert Whittaker, TUF Smashes, faced off against TUF 11 Winner Court McGee in welterweight action. The opening round was mostly a feeling out period as both fighters threw jabs and circled one another. McGee attempt a few takedowns and was knocked down by Whittaker on one attempt. It was a different second round from both fighters as they exchanged hard shots and picked up the power. McGee took a slight upper hand early, but Whittaker bounced back to seemingly take the middle round.

Early in the final round it looked like Whittaker had finally found his range and started getting comfortable throwing combinations. He was fighting with more confidence and handled McGee’s pressure. Less than three minutes remaining in the round and McGee started fighting back and looked to take back control of the fight. This battle wound up going to the judges who scored it a split decision victory for Court McGee.

Another TUF winner took to the cage as Kelvin Gastelum took on Brian Melancon. Gastelum won the past season of TUF as a middleweight, but chose to drop down to welterweight and it proved to be a wise decision. Gastelum connected on a solid 1-2 combination to drop Melancon less than two minutes into the bout. The TUF winner took his competitors back and sunk in a rear naked choke. Gastelum had his grip in tight and Melancon was forced to tap. Gastelum improved to 7-0 in his professional MMA career.

The night’s co-main event paired up two top-10 lightweights as Donald Cerrone faced off against Rafael dos Anjos. With UFC Lightweight Champion Benson Henderson taking on Anthony Pettis this Saturday, a win tonight for either Cerrone or dos Anjos could help shake up the division even quicker.

It looked like a mundane opening round until dos Anjos clipped Cerrone and took full guard. With a steady stream of elbows and punches, dos Anjos took the opening round but might have missed a great opportunity to finish the fight. Cerrone showed more fight and resilience in the second round, even being able to take down dos Anjos. But, that was the most offense Cerrone could muster. In the final round, dos Anjos came out with a lot more energy and urgency. Many had him up after two rounds, but he fought like a fighter with his back against the cage.

Midway through the third round Cerrone opened up a cut above dos Anjos’s left eye. Cerrone began to press forward, but it proved to be too little too late as dos Anjos won a unanimous decision victory (29-28 x 3).

In a match that was four years in the making, Carlos Condit was seeking revenge against Martin Kampmann. Back in April of 2009, Kampmann defeated Condit via split decision in Condit’s UFC debut. It was a rematch that both fighters welcomed and one that, quite honestly, meant a lot for both careers.

Condit entered the bout on a two-fight losing streak while Kampmann had won three of his last four bouts. This fight picked up right where the last one ended. Kampmann fought for and got early takedowns while Condit tried to do work off his back. But, it was Kampmann and his four takedowns that took the opening round. The bout was believed by many to be a grudge match that would end up in a brawl, but through one round it didn’t seem that way.

Kampmann came out in the second round looking to continue his offense, but Condit followed with a much better round. He was able to stuff takedowns and fought with much more of a rhythm than he had in the first round. Any time Kampmann attempted a takedown, Condit stuffed it and mounted his own offensive attack. There was more confidence behind Condit’s attacks while Kampmann seemed less urgent. It was more of the same in the third round. Condit opened up a cut with a right elbow and began to show a lot of confidence with each strike he threw.

Kampmann came out in the fourth with a purpose and took down Condit, but once again it would lead to nothing. Condit escaped and began to pick Kampmann apart. A right hand rocked Kampmann then Condit began to pour it on and finished the fight with several knees.

Carlos Condit waited four years to exact his revenge and he did it in brutal fashion with a TKO victory over Martin Kampmann and snaps his two-fight losing streak. 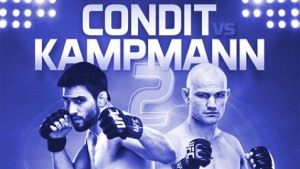