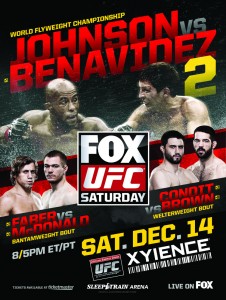 Looking at the fights that have taken headlines recently in the UFC, it would be appropriate for one to assume that there’s a bevy of talent in the heavier weight classes. But, there is an argument to be made that there’s even more talent the lower in weight class you go.

There’s countless title contenders in the lightweight, feathwerweight, bantamweight and flyweight divisions. This Saturday in Sacramento the best those weight classes have to offer will be in action.

Due to injuries and changes to the card, every fighter on Saturday’s main card will weigh no more than 155 at the point of weigh-ins. (Fight poster shows Carlos Condit vs Matt Brown, but Condit suffered an injury thus removing that fight from the card). And, each of the fights on the main card have more than just wins and losses on the line.

Kicking off the FOX portion of the card is a lightweight showdown between Joe Lauzon and Mac Danzig. Neither fighter has been on a “roll” as of late. Both have lost their last two fights and there are rumors swirling that they are fighting for their UFC careers. Whether or not that is the case won’t play much significance in this one. Both fighters are known for their battles inside the octagon and willingness to get into brawls. On any other card this could be an early candidate for Fight of the Night, but not on this night.

The deeper you go into this main card, the lighter the fighters get. After the lightweight bout, a featherweight tilt between Chad “Money” Mendes and Nik Lentz takes to the octagon. Mendes has won his past four fights all via KO/TKO and is inkling for another as he lays out opponents in hopes of getting another title shot. Lentz is on a win streak of his own. He’s won three straight, including a unanimous decision victories over Diego Nunes and Hacran Dias.

There’s been plenty of trash talk between these two. Lentz has said he’ll be the one to get the title shot after this fight while Mendes has made it known that he’ll finish Lentz on his way to a title shot. Considering Mendes recent history, it is difficult to go against the Team Alpha Male fighter.

Mendes isn’t the only Team Alpha Male fighter on the card. Danny Castillo is on the prelim, Urijah Faber and Joseph Benavidez are both main eventing the night.

In the night’s co-main event Faber takes on Modesto’s Michael McDonald in bantamweight action. It’s a showdown between one of the most decorated fighters in the division and one of the division’s fastest rising stars. There’s countless storylines to this bout. Old vs New, title contenders facing off, Sacramento vs Modesto…the last one likely only means anything to those from Northern California.

What this really is is a bout between two of the best in the UFC’s bantamweight division. McDonald is 5-1 in his UFC career and Faber is riding a 3-fight win streak. The bantamweight title picture should clear up in February after Dominick Cruz and Renan Barao finally meet up. A winner by Faber or McDonald could have them next in line, that’s more imaginable for Faber.

Many see this as being a fight with a quick finish, this blogger included, and with the way these two fight it isn’t out of the realm of possibility. Faber has won 2 of his last 3 by submission and McDonald is known for his knockout capability. This could be a quick fight with an even quicker end. This would be one of those bouts where it’d be smart to not leave the room or look away.

There is not one fighter on this main card that doesn’t have immense speed. The night’s main event title fight may have two have the fastest fighters in the whole UFC.

UFC Flyweight Champion Demetrius “Mighty Mouse” Johnson defends his title against #1 contender Joseph Benavidez in a rematch of the inaugural flyweight title fight. Since that bout in September of 2012, both fighters have been on impressive streaks.

Benavidez has won his last three bouts while Johnson has successfully defended his title twice. Johnson had a unanimous decision victory over John Dodson and submitted John Moraga. Joe’s wins have been over Ian McCall, Darren Uyenoyama and Jussier da Silva. The last two coming by way of technical knockout.

Like Faber vs McDonald, this one has a multiple storylines. Not only is it a title fight, but it is a rematch between the top two flyweights in the world. Benavidez has admitted that his loss to Johnson has been a motivation in his past bouts and this one. Motivation alone won’t beat Johnson, who’s shown to get better as fights go on. The last time these two met ended in a split decision victory for Johnson and fans should expect another highly contested battle this time around. Whether or not the champ gets the nod this time will have to be seen.

UFC on FOX 9 has shaped up to be a phenomenal card with countless fighters willing to leave it all in the octagon. On Saturday night, it’ll be seen if these lighter fights can carry the heavy burden of living up to the hype.