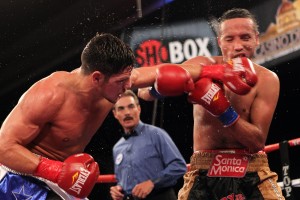 Magdaleno, the popular and charismatic Las Vegas fighter, dispatched late-replacement Fernando Beltran Jr. ofMexico by seventh-round TKO as Beltran’s corner threw in the towel to save their near defenseless man late in the round. 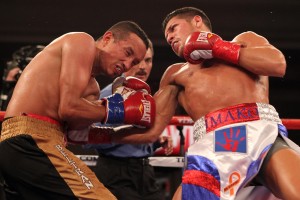 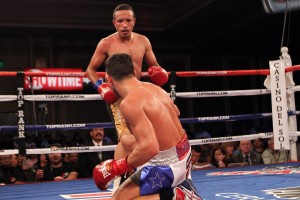 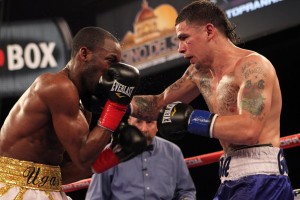 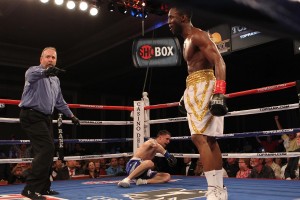 Beltran accepted the fight early during fight week as Magdaleno’s original opponent Eduardo Lazcano withdrew from the fight on Monday with a training injury. Beltran, who usually campaigns at 122 and 126 pounds, had a fight cancelled last weekend in Mexico when his opponent fell out.

Magadaleno came into the fight looking to make a statement, fighting with a mix of determination, poise and ferocity.  His fast hands and creative combination punching was no match for Beltran, a veteran of two world championship bouts.

Early in round four, Beltran dropped Magdaleno with a straight left hand. But the flash knockdown was not enough to discourage the young star.  Magdaleno responded with a furious attack. SHO Stats indicated Magdaleno out-landed Beltran 28 to eight in power punches in that round.

Magdaleno sensing he had turned the corner on Beltran in the fourth continued to punish the Mexican round after round until he scored a knockdown of his own early in the seventh.  After rising, Beltran absorbed more power shots until his corner, led by his father Fernando Beltran, Sr., waived the proverbial white flag.

Magdaleno entered the fight ranked second by the WBA and third by the WBC and is sure to be closing in on a world title shot at 22-0 with 8 knockouts.

Garcia and Ugas was a battle of undefeated fighters but the result was seen as a surprising upset. Ugas came toTucson with a significantly higher pedigree than his workmanlike opponent.  The former Cuban international amateur standout and 2008 Olympic Bronze Medalist, Ugas was the sharper and more accurate puncher in the bout.  But Garcia simply outworked Ugas in the eyes of two judges.  The scores were 76-75 twice for Garcia with one judge scoring the same total for Ugas.

Despite suffering a knockdown in the fifth, Garcia would not be denied. He threw wild upper cuts from the outside and brawling combinations on the inside in every round. His relentless attack was enough for the judges to award him the fight despite appearing to be in a class just below the stylish Ugas.

Garcia remains undefeated with 12 wins (8 KOs) and has a crowd-pleasing straight forward style that should earn him more exposure in the near future.  Ugas suffered his first professional loss and drops to 11-1 (5 KOs).

For information on SHOWTIME Sports, including exclusive behind-the-scenes video and photo galleries, complete telecast information and more, please visit the website at http://sports.SHO.com.