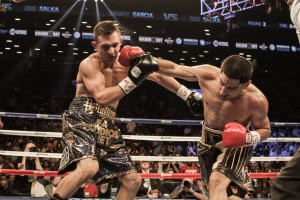 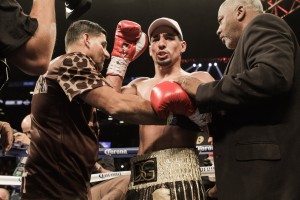 Garcia knocked Salka down twice before laying his challenger flat on his back with a powerful left hook with 29 seconds left in the second round to secure the knockout victory.

“I didn’t think this was going to be an easy fight. I thought he’d try to box me. But it is not about the opponent. When I am at my best I can beat anybody and I already proved that.”

On a potential matchup with Lamont Peterson…“I leave it up to Al Haymon, but if he [Peterson] wants it. I’ll give it to him. I show up fight night and sometimes I have good nights or bad nights, but I always find a way to win.”

SHOWTIME analyst Paulie Malignaggi on the fight…”He’s not going to get a lot of credit because of the opponent. But for those that really know boxing, you can see that Danny Garcia was very sharp tonight. Punching well, moving and defending very well. He looked sharp and would have given anyone a tough time tonight.”

After the fight Salka said, “I’m good. It wasn’t a tougher fight than I expected. I got caught with a shot. What am I going to do?”

Peterson, of Washington, D.C., controlled the fight from the outset, lighting up New York native Santana with left hooks and shots to the body. Peterson was highly accurate, landing 53 percent of his power punches and 48 percent of his total punches.

The champion diversified his attack in later rounds, with Santana enduring consistent punishment. With 11 seconds left in the tenth, referee Pete Santiago had seen enough and awarded Peterson the technical knockout.

“I was able to show a lot of dimensions of my game,” said 30-year-old Peterson. “I was boxing well. I fought on the inside well. I actually think I should have gotten him out of there sooner but I give myself an okay grade.

“I think it was [round] four or five. I hurt him. I didn’t finish him. I don’t know why I didn’t but I knew I hurt him –and it was over– it was just a matter of time. I just had to get the right spot, push on the gas and go forward.”

On a potential fight with Danny Garcia…“This is the fight all the fans and the media want. I’m willing to do it. Again, I’m going to say this: ‘I’m willing to do it.’ Hopefully it gets done…It makes more sense to do it at 140 but if it has to happen at 147 I have no problem.”

On his feelings during his brother’s fight…”He [Anthony] did me a favor tonight…I had to fight but that’s my brother. I was a little nervous when he was in there. Good thing is he got him out of there in the first round so I didn’t have to worry about him for too long.”

“He came in with a good game plan. He’s tougher than I expected. His style frustrated me,” said Santana. 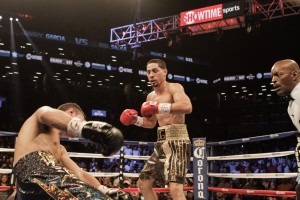 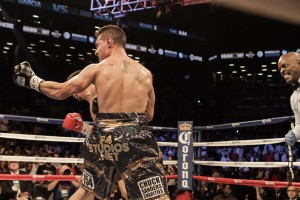 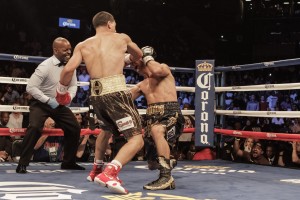 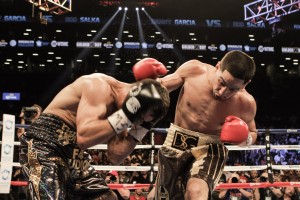 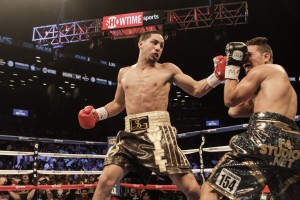 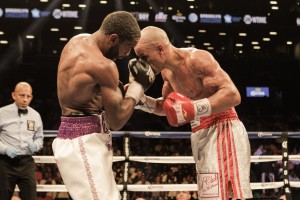 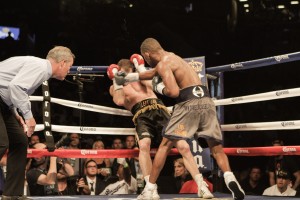 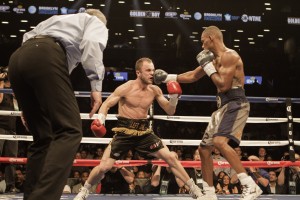 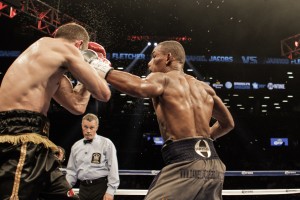 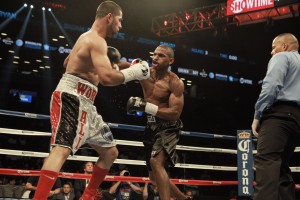 In the SHOWTIME CHAMPIONSHIP BOXING opening bout, Daniel “The Miracle Man” Jacobs (28-1, 25 KOs) completed the next step in his inspirational journey by winning a world championship in his hometown of Brooklyn, N.Y., only three years after battling cancer. With his fifth-round knockout victory over Australian Jarrod Fletcher (18-2, 10 KOs), Jacobs earned the vacant WBA Middleweight World Championship and the 25thknockout win of his career.

Jacobs came out of the corner at the bell with suffocating offense and knocked Fletcher down halfway through the first round. He continued to batter Fletcher against the ropes with combinations and the Aussie barely survived round one.

Fletcher recovered from the first round but had no answer to Jacob’s determined attack. Jacobs finally scored the knockout in the fifth with only two seconds left in the round.

Jim Gray asked Jacobs if he even thought about boxing when he was on his deathbed. “My son, my baby boy, was my first priority. But getting back into the ring was my second motivation.  Boxing taught me to have the mental strength to overcome anything. And that’s what I did.”

“My advice [to others fighting cancer] is to be strong. But even if you can’t beat it, be happy. Be grateful that we even have this life.

“I wanted to pace myself. I didn’t want to punch myself out. I respected him. But I didn’t see any way that he could defeat me. I was sitting down on my punches and throwing in bunches. He was a tough customer. I hope he’s okay.

“I want to fight Peter Quillin in Brooklyn right here at the Barclays Center. The Brooklyn fans deserve it and it’s going to happen soon hopefully.

After the bout, Fletcher told Gray, “I’m good. I got caught with the shot. That’s boxing. I’m going to go back to the drawing board. He’s a good fighter. I’m disappointed in my performance. It is what it is.”

In the headlining bout on SHOWTIME EXTREME, popular Brooklyn prospect Sadam Ali (20-0, 12 KOs), edged out Jeremy Bryan (17-4, 7 KOs), with a split decision victory in their 10-round matchup for Ali’s WBO Intercontinental Welterweight Title. Judge Tom Schreck scored the bout 96-93 in favor of Bryan, while judges John McKaie and Robert Perez scored in 96-93 in Ali’s favor.

Both fighters exchanged power punches and momentum throughout the fight. Bryan came out strong in the early rounds, wobbling Ali with a left hook just as the bell rang to end the fourth.  Ali took control in the later rounds, rocking Bryan with a combination in the fifth and scoring a key knockdown in the ninth with a left hook.

Ali said, “I knew it wouldn’t be easy. I never underestimated him. I just wanted to feel strong in the ring. My legs were kind of not there, but I was good mentally. I just have to work around it.

“I just didn’t feel myself. This all falls back on my performance. I just happened to get the decision and I’m ready to go back to the gym and work on a few things. Whatever Golden Boy has planned for me is what I’m going to do.

“[The fans are] my motivation. That’s what gives me the power. I just want to perform better next time. You’ll see a better Sadam Ali.”

“Tonight was a demonstration of the rust being taken off,” said A. Peterson. “I just caught him with a good shot. It’s boxing. It could have been me. Sometimes it’s the calculation of punches. You can misjudge a punch. He just got caught.”

“I knew he was going to come out tough, he’s a veteran so as soon as I got in there I took my time,” said Ochoa. “My legs cramped up a little bit but hey, I’m at Barclays Center let me give everybody a show. I dug down and I fought my heart out.

“I just have to go to the gym and keep working at my craft. I’m only 21 and I’m still learning.”

“We knew he wasn’t supposed to be in the ring with me so we took care of him and handled our business. I caught him with a straight left and then he crumbled. I’m happy with my performance. You see me smiling don’t you?”

““I wasn’t looking to just continue getting knockouts. Most importantly we just wanted to win. I learned to be patient. I’m not afraid to go the distance. I’m young with a lot of learn.”

The opening bout of the evening saw super middleweight prospect D’Mitrius Ballard (6-0, 5 KOs) score a quick TKO victory over Barry Trotter (2-2, 1 KO) 2:35 into the first round.

“I got him out of there,” said D’mitrius Ballard, “There are a couple of things that I need to work on but I am prepared for anything and I will be back on Monday.”