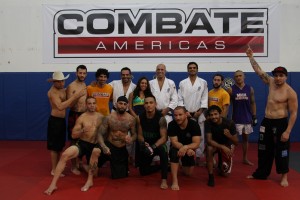 Amongst the tough competition Combate Americas conquered for “Best Variety or Reality Series” was Mark Burnett’s smash hit singing competition reality series The Voice that is set to roll out its seventh season of programming on NBC.

“One of the immediate goals with Combate Americas,” continued McLaren, “was to create an authentic show that Latino fight fans in the U.S. would not just enjoy, but also identify with on both a personal and cultural level.  Winning the Imagen Award for ‘Best Variety or Reality Show’ confirms that we achieved this goal.”

In addition to the hosts and Daddy Yankee, the series features a number of guest appearances by other celebrity athletes and entertainers, including legendary UFC champion and Hall of Famer Royce Gracie; Top Chef Estrella hostess and former Miss Universe runner-up Cynthia Olavarria; and Lucha Libre superstar Blue Demon, Jr.

The Combate Americas reality TV series explores the lives, personal struggles and triumphs of 10 aspiring world champions who hail from various parts of the U.S. as well as Mexico, as they engage in grueling and tricky physical competitions that culminate with matchups between the fighters in the Combate Americas cage, La Jaula.

The series has also been nominated for “Best Reality Moment” by Premios Tu Mundo (Your World Awards), which airs live on Telemundo from American Airlines Arena in Miami, Fla. on Thursday, August 21.  The winner of the award will be determined by fans, who can vote for their favorite moment here.

The showdown between series welterweight (170 pounds) arch-rivals, undefeated Danny “The Machine” Morales of Chicago, Ill. and Brazilian Jiu-Jitsu stylist J.C. Llamas of Bakersfield, Calif., has been selected as a nominee for “Best Reality Moment” by Premios Tu Mundo.

The 23-year-old Morales, who was incarcerated at the age of 16, discovered the sport of MMA and his calling in life in his jail cell while flipping through the pages of a magazine.  Llamas, a spirited 28-year-old, grew up in poverty in Mexico and accepted his first professional fight with just six weeks of training, in order to be able to pay for medicine needed by his ill grandmother.

Combate Americas is slated to roll out its live event series in the fall on a date to be announced in Miami.

Combate Americas, LLC. is the first U.S. Hispanic Mixed Martial Arts (MMA) sports franchise in history, designed to build Latino fighting champions and serve Hispanic fans, one of the world’s most avid groups of prize fighting enthusiasts.  The Combate Americas franchise includes reality TV programming, live events and mobile programming.  The company’s CEO, Campbell McLaren, is universally recognized as the co-founder/co-creator of the Ultimate Fighting Championship (UFC).  New York Magazine described McLaren as “the marketing genius behind the UFC” and Yahoo! Sports proclaimed that he “knows more about the sport than just about anyone in it today.”  With an unprecedented product and a blue-chip ownership and management team, Combate Americas is poised to break new ground and bring about a new era in world championship level MMA competition.