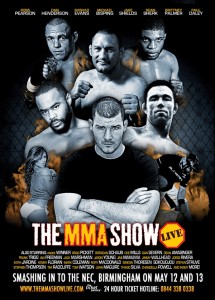 Birmingham, UK – March 27, 2012 - It was confirmed today through their official website and Facebook page that current UFC Interim Welterweight Champion Carlos Condit and former two time UFC champion and MMA legend BJ Penn complete the lineup for Europe’s biggest ever MMA fan expo, The MMA Show Live, being held May 12 - 13 at The NEC in Birmingham.

They join a star studded lineup that includes the likes of Dan Henderson, Rashad Evans, Michael Bisping and Jake Shields, giving fans access to more top level UFC and MMA talent than any MMA show of its kind ever to be held in Europe.

Liam Fisher, the organizer of The MMAShow Live, stated “We promised a current UFC champion and a former UFC champion and we delivered! How often do you get the chance to meet and train with a legend like BJ Penn or a UFC champion like Carlos Condit? As we’re all such huge MMA fans, we’ve done everything we can to make this a show all about the fans and I think we’ve done exactly that. This show is made for the fans, by the fans! ”

The full schedule for the weekend was also announced on their official website www.themmashowlive.comwhich includes a PRIDE Retrospective on the main stage with Dan Henderson, Frank Trigg, Mark Coleman and Sokoudjou, and an Ultimate Fighter Retrospective with former TUF coach BJ Penn and TUF alums Matt Mitrione and Chris Leben.

About The MMA Show Live:

The MMA Show Live is a bi-yearly interactive fan experience dedicated to mixed martial arts from around the World. Populating a second hall at the NEC in Birmingham alongside The Martial Arts Show Live, The MMA Show Live consists of five training areas where some of the biggest names in the business will host special group training sessions, a huge stage & screen for Q&A sessions, an autograph zone where fans can meet their favorite fighters and exhibition stands where some of the biggest brands in MMA will be selling merchandise and much, much more.