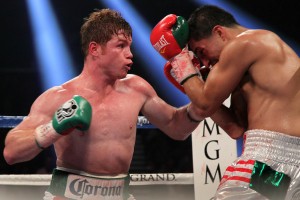 IN FIFTH ROUND TECHNICAL KNOCKOUT

In Win Against Eric Morel

And Available at SHOWTIME ON DEMAND Beginning Today/Sunday

LAS VEGAS (Sept. 16, 2012) – Canelo Alvarez knocked down Josesito Lopez three times en route to a dominating fifth round technical knockout defense of his WBC Super Welterweight World Championship in front of a sold out crowd of 14,275 fans at the MGM Grand Garden Arena in Las Vegas, Nev. on Saturday. 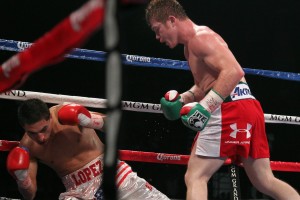 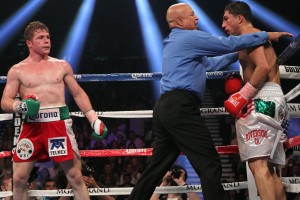 Canelo headlined the SHOWTIME CHAMPIONSHIP BOXING Mexican Independence Day Weekend quadruple header and the undefeated Mexican star did not disappoint.  Dubbed “Knockout Kings,” the promotion lived up to its billing, producing three entertaining knockouts in which none of the scheduled 12-round bouts went past the eighth round. 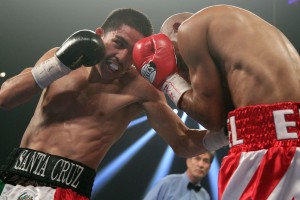 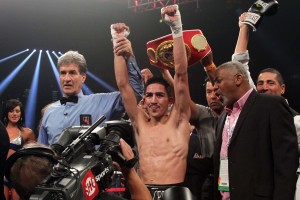 In what surely will be considered a Fight Of The Year candidate, former world champion Marcos Maidana (32-3, 28 KOs), of Santa Fe,Argentina, scored a knockout at 0:43 of the eighth round to defeat perennial contender Jesus Soto Karass (26-8-3, 17 KOs), of Sinaloa, Mexicoand captured the vacant WBA Intercontinental Welterweight Title. 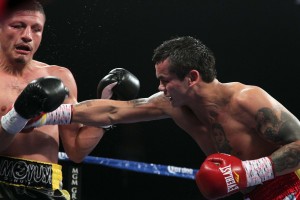 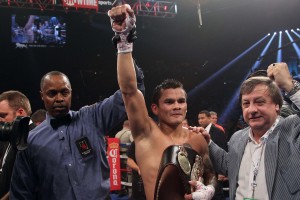 As promised leading into the blockbuster event, Golden Boy Promotions awarded a $100,000 bonus to the knockout of the night, decided via a text-to-vote competition that was promoted on SHOWTIME and inside the MGM Grand Garden Arena.  In a decision that thrilled his thousands of screaming fans inside the arena, Canelo was awarded the check for his thrilling performance. 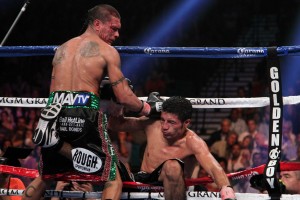 President of Golden Boy Promotions Oscar De La Hoya then made a surprise announcement and awarded each victorious fighter an additional $25,000 bonus for their impressive work.

Canelo (41-0-1, 30 KOs), of Guadalajara, Mexico, scored knockdowns in the second, third and fourth rounds before referee Joe Cortez stopped the bout at 2:55 of the fifth round when a defenseless Lopez was visibly hurt against the ropes and could not fight back.

“I’m not always looking for the knockout, but this was perfect tonight,” Canelo said.  “I had a big responsibility fighting for my fans around the world this weekend and I think I made them happy. I want the big fights now – (Miguel) Cotto and (Floyd) Mayweather.”

“I knew he was a tough fighter and he proved he’s a better fighter,” Lopez said.  “He was smarter, stronger and patient. I felt good going in but there was a big size difference.  I was hoping to land a good punch to change the momentum.”

In the opening bout of the SHOWTIME telecast, Leo Santa Cruz (21-0-1, 12 KOs), of Los Angeles, Calif. defended his IBF Bantamweight World Championship against former two-time world champion Eric Morel (46-4-0, 23 KOs), of San Juan, Puerto Rico, with a technical knockout victory in the fifth round when Morel’s corner stopped the bout.