BROCK IS BACK! LESNAR TO DEFEND BELT AGAINST CARWIN AT UFC® 116 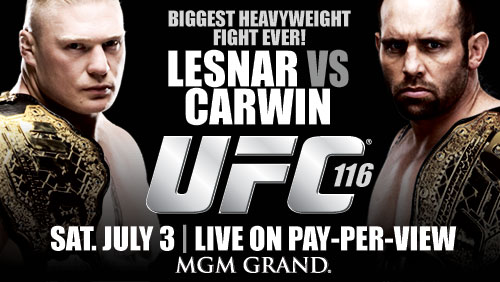 “When people wonder why the heavyweights capture the imagination of
all fight fans, it’s because of guys like Brock Lesnar and Shane Car
win,” said UFC President Dana White. “Not only are they great
athletes and former national wrestling champions, but they both have
the ability to end a fight with one punch. This is one of those fights
that you won’t be able to turn away from because it can be over
in a split second, and when it’s over, only one will walk away as the
undisputed UFC heavyweight champion of the world.”

UFC® Fight Club™ members will have the opportunity to purchase
tickets to this event Tuesday, May 11, at 10 a.m. PT via the website UFC.com
A special Internet ticket pre-sale will be available to UFC newsletter
subscribers Wednesday, May 12, starting at 10 a.m. PT. To access
this presale, users must register for the UFC newsletter through UFC.com

UFC 116 will be available live on Pay-Per-View on iN DEMAND,
DIRECTV, DISH Network, TVN, BellTV, Shaw Communications, Sasktel,
and Viewer’s Choice Canada for a suggested retail price of $44.99 US
/$49.99 CAN for standard definition or high-definition broadcasts (w
here available).

Winner of three in a row against Frank Mir, Randy Couture and Heath
Herring, Brock Lesnar (fighting out of Minneapolis-St. Paul, Minn.,
4-1 professional record) has finished his last two opponents and
stands atop of the UFC heavyweight division. The former NCAA
Division I national champion wrestler and four-time All-American
earned the title with an impressive second-round TKO over Couture at
UFC 91. Then, the 6-foot-3, 265-pound fighter made his first
successful title defense by stopping Frank Mir at UFC 100, but now
Lesnar faces his most dangerous opponent to date when he takes on
Shane Carwin.

“I can’t wait to get back in the Octagon and defend my UFC
heavyweight title,” Lesnar said. “July 3rd can’t come soon
enough. I’m ready to fight. At UFC 116, Shane Carwin is going to face
the REAL UFC heavyweight champion. I’m going to end Shane’s
perfect record and walk out of the Octagon with my championship belt
around my waist.”

Speaking of dominant heavyweight fighters – nobody has seen the
second round against Shane Carwin (fighting out of Denver, Colo., 12-0).
His impressive win over Frank Mir in his last fight at UFC 111 secu
red Carwin the interim heavyweight title and at 3:48 was the longest
any professional fighter has gone with the former NCAA Division II
national champion wrestler. Carwin is a perfect 4-0 in the UFC with
three of his four finishes coming under two minutes, and now the
Greeley, Colo. native looks to stay undefeated and earn the undisputed
UFC heavyweight championship.

“I have wanted a chance to compete against Brock since my college
wrestling days,” Carwin said. “He is an elite athlete who is always
dangerous. His college wrestling background makes him extremely tough.
I will be the first fighter he has faced who is equal in size. He
won’t be able to bully me or hold me down as he has others in the
past. This is the biggest fight of my life. I think it can go down as
one of the greatest fights in UFC history. I expect to have my hand
raised and to become the REAL UFC heavyweight champion.”

I am picking Lesnar to win this fight, and I am dreaming of the day we all watch Junior Dos Santos fight Brock and put him away in the first.

I admire the valuable information you offer in your articles. I will bookmark your blog and have my children check up here often. I am quite sure they will learn lots of new stuff here than anybody else!