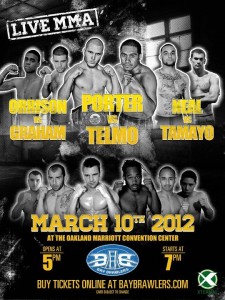 OAKLAND, CA (March 10, 2012) – Bay Brawlers, Northern California’s
premier amateur MMA league, is ready to bring you Chapter 2 Revenge on
March 10, 2012. The night will be headlined by a bantamweight title
fight as champion Jared Porter, fighting out of Crispim BJJ in
Pleasanton, takes on Team Black’s Brandon Telmo.Porter, whose twin
brother Jordan holds the Bay Brawlers’ lightweight title, will be
putting his perfect 3-0 record up against Telmo’s 3-0 record. Porter
defeated Telmo’s teammate Cameron Daniels at Bay Brawlers 1 in October
for the bantamweight title. Jared and Brandon are pure strikers by
nature, but have been known to implement ground and pound on occasion.
With their track records, both fighters promise a quick-paced and
exciting bantamweight brawl.

Joining Porter and Telmo in the co-main event is Porter’s Crispim BJJ
teammate Joseph Neal. Neal will be taking on Manuel Moreno out of Team
Cia Paulista for the featherweight title in the co-main event. Neal is
carrying a 6-0 amateur record as Moreno looks to improve on a 3-0
start to his career.

Three fights round out the main card. In a bantamweight title Cody
Orrison out of Gilbert Melendez’s El Nino Training Center will be
taking on Malcolm Graham of KO1 Fitness in Hayward. In a welterweight
fight Team Black’s Juan Quesada will look to improve on his 4-0 record
when he takes on 4-0 David Lopez, who is fighting out of LA’s 10th
Planet Jiu-Jitsu. It is a welterweight bout that pits Northern
California versus Southern California and Team Black versus 10th
Planet.
Finishing out the main card are the big boys. It is the debut of Ralph
Gracie Purple Belt Miguel Royal taking on well-known football and
wrestling all-star George Jordan in a 195lb. bout. Royal will be
trying to make a splash with a debut, but Jordan will try to keep the
locals happy and walkout with a victory.Leading off the night is, what
should be, an exciting light-heavyweight bout between Ricardo Barros
BJJ’s Kurt Filler and Dragon House’s Lamar Gosey. There is some bad
blood there as Filler knocked out Gosey’s teammate Myron Smith back on
August 20, 2011 in Filler and Smith’s debut.  There are nine undercard
fights that include the likes of Cameron Daniels, Ronnie McCoy,
Francisco Contreras and several fighters making their amateur debuts.

With Northern California being a hot-bed for MMA talent and gyms, Bay
Brawlers gives amateurs a place to shine bright and Chapter 2 –
Revenge promises to be another exciting night of amateur MMA action.Be
sure to be there on Saturday, March 10th at the Oakland Convention
Center at the Oakland Marriott for all the action. Doors open at 5pm
and fights start at 7pm.