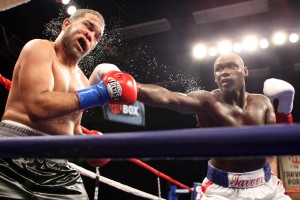 MIAMI, Okla. (Oct. 16, 2010) – It may not have been an artistic success, but comebacking former light heavyweight world champion Antonio Tarver accomplished what he set out to do Friday in the main event on ShoBox: The New Generation on SHOWTIME®:

In the co-feature at Buffalo Run Casino, unbeaten Shawn Porter (17-0, 13 KOs) of Cleveland, Ohio, captured the vacant North American Boxing Federation (NABF) welterweight belt with an impressive, bloody ninth-round TKO over Hector Munoz (18-4-1, 11 KOs) of Albuquerque, N.M., in a match that some felt should have been stopped earlier.

Southpaw Tarver, who turns 42 on Nov. 21, was pleased with his performance even though he appeared to injure his left shoulder in the third or fourth round.

“I feel I looked great,’’ he said. “There was no ring rust. I didn’t get hit much. I didn’t get hurt. I’ll get the shoulder diagnosed, but it didn’t affect me. I wasn’t going to let it affect me. I did what I had to do and stuck to my game plan. I’m back and I’m here to stay. I’m a heavyweight now. The magic still lives.’’

Tarver’s goal, of course, is to become only the fourth 175-pound titleholder in history to become a heavyweight world champion. The others were Michael Spinks (1985), Michael Moorer (1992) and Roy Jones Jr. (2003).

“There is still work to do,’’ Tarver said. “Aguilera was a good trial horse for me. He surprised me because he stayed on his bicycle so much. But I’ll be back in the gym. I’ve got to power up. I thought I caught him with some good shots. No one (in the heavyweight division) is going to outbox me.’’

Tarver will return to SHOWTIME as an expert analyst for the next ShoBox telecast on Friday, Nov. 5.

A 2008 United States Olympic Games alternate, the promising Porter dominated the courageous, aggressive-minded Munoz from the outset. Making his fourth start on ShoBox in 10 months and first at 147 pounds, Porter, 22, won every round before Munoz’ cornermen finally halted the one-sided proceedings at 2:05.

“The fight went exactly as I expected,’’ said Porter, a poised, versatile boxer-puncher who throws power punches in bunches from all angles with both hands. “He came forward all the time and never stopped trying. I was surprised at how long they let the fight go on, but I knew I had to stay focused.’’

This is a smart blog. I mean it. You have so much knowledge about this issue, and so much passion. You also know how to make people rally behind it, obviously from the responses. Youve got a design here thats not too flashy, but makes a statement as big as what youre saying. Great job, indeed.