5 up, 5 down…who shined brightest in Denver? 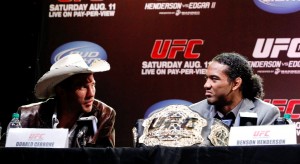 Donald Cerrone, left, and Benson Henderson, right, came out as two of the top performers at UFC 150.

High in the altitude of Denver, the UFC held one of its highly anticipated rematches in recent memory. The lightweight title bout between Benson Henderson and Frankie Edgar might’ve been the main event, but there were several other fighters that stole the show.

As always there were winners and losers, but sometimes-even losers come out looking good. This was no different on Saturday night. There were 20 fighters on the UFC 150 card, but let’s look at the 5 that had the best night and the 5 that had the worst.

Benson Henderson: No surprise that the fighter that came out looking the best also had the most to lose. In his rematch versus Frankie Edgar, Henderson was strong enough to not lose his title belt. In what many believed was a controversial decision, Henderson came out with the split decision win. The win ends the string of instant rematches in the lightweight division and sets up Henderson versus Nate Diaz.

Donald Cerrone: “The Cowboy” looked to follow up his victory over Jeremy Stephens and inch closer to title contention with a win over friend Melvin Guillard. In the first 30 seconds it looked as if Cerrone would be on the losing end. He got rocked early, but recovered after a quick barrage to land a head kick to rattle Guillard. The kick set up a right that dropped Guillard and ended the fight in just 76 seconds. Cerrone earned Knockout of the Night honors and the bout earned Fight of the Night.

Erik Perez: In the second bantamweight bout of the night, Perez went head-to-head with UFC vet Ken Stone. Perez, in just his second UFC bout, didn’t take too long to make an impression. In just 17 seconds Perez landed a vicious blow that ended Stone’s night. It was the quickest TKO ever in the bantamweight division.

Nik Lentz: As a veteran in the UFC, Lentz hasn’t been able to build a steady wave of momentum at lightweight and he was making his featherweight debut. That would explain his placing on a Facebook fight against Eiji Mitsuoka, who was making just his second UFC appearance. His TKO victory over Mitsuoka might have promised him a spot on a televised prelim next time around.

Dennis Bermudez: After losing the TUF 14 Finale to Diego Brandao and a subsequent move to featherweight, Bermudez has been looking to build momentum. He defeated Pablo Garza via unanimous decision in May and looked to build a short streak versus Tommy Hayden. Showing off his submission skills, Bermudez sunk in a standing guillotine choke as time winded down in the first round to defeat Hayden.

Melvin Guillard: It wasn’t bad enough that Guillard got knocked out, viciously, by Cerrone but it happened a little over 24 hours after he weighed in at 157.5lbs for their lightweight bout. Guillard. It wasn’t the best 48 hours in Guillard’s career and, the sad thing is, people have come to expect this from him. Just another occasion of Melvin getting close to title contention then coming up short.

Justin Lawrence: In just his second bout in the UFC, Lawrence was leading off a PPV and many expected big things from him in his featherweight debut. He was the favorite over Max Holloway who was making his third UFC appearance this year. Everyone’s expectations fell short, especially Lawrence’s, as Holloway defeated him via TKO in the second round. It wasn’t a bad showing, but a very disappointing one to a star who was on the rise.

Ken Stone: Not much to really say here. It’s quite clear why Stone had a bad night and it all happened in 17 seconds.

Frankie Edgar: Edgar’s night wasn’t the worst, but it was the most disappointing. He fought his heart out and even won the fight on one judge’s scorecard in route to losing a split decision to Henderson. The loss took him out of any possible title shot in the near future and puts his lightweight future in doubt. Many have tossed around rumors of a move to featherweight, but Edgar is hell-bent on staying at 155lbs and it seems nobody will change that.

Yushin Okami: Okami, even though he won, had a mediocre performance. In one of the oddest scenes in recent UFC history, Okami used ground and pound to defeat Buddy Roberts in the second round of their fight. The GnP he utilized wasn’t dominant nor was he landing vicious strikes. Roberts just seemed to staying still and unable to maneuver out of position. It was a lackluster end to a short, but weird bout.